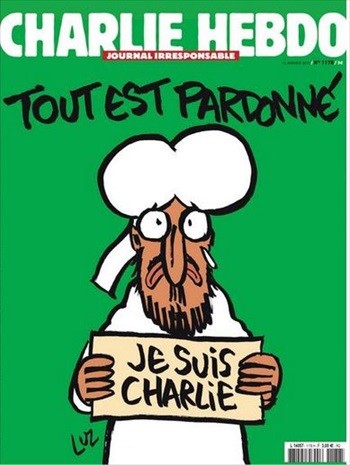 The Times‘ public editor Margaret Sullivan disagreed with that decision this morning in a blogpost.

The Times did readers “a disservice” by deciding against publishing the cover, Sullivan wrote, noting that because the newspaper didn’t publish it print readers wouldn’t be able to find it and online readers would have to track down the image.

“The cartoon itself, while it may disturb the sensibilities of a small percentage of Times readers, is neither shocking nor gratuitously offensive. And it has, undoubtedly, significant news value,” Sullivan wrote.

Sullivan previously commented on the Times‘ decision last week against publishing Charlie Hebdo‘s controversial Muhammad cartoons, as iMediaEthics wrote. She pointed out today that “The Times did publish a number of Charlie Hebdo cartoons, but none that pictured Muhammad.” As Sullivan reported last week, Times executive editor Dean Baquet said he decided against publishing the cartoons because of their potential offensiveness.

She wrote “The Times undoubtedly made a careful and conscientious decision in keeping with its standards. However, given these events — and an overarching story that is far from over — a review and reconsideration of those standards may be in order in the days ahead.”

In response to that decision, Sullivan wrote today that “a vast majority of readers were critical” of that choice.