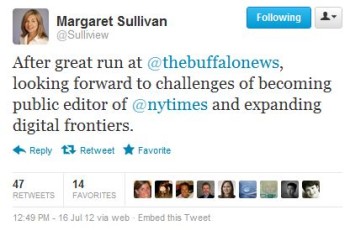 Sullivan’s term as the fifth public editor begins Sept. 1, when current Times public editor Arthur Brisbane steps down.  According to the Times‘ announcement,  her “assignment is for four years, with the option of leaving after two years or renewing for another two.”

As the Times explained in a press release, Sullivan will also have “a more active online role” than previous public editors. Sullivan “will engage with our readers in a more timely way by creating a presence in social media, a blog and Web page as well as a print column,” according to The New York Observer, which published an “internal memo from the Times‘ executive editor Jill Abramson.”

The New York Times’ press release on Sullivan’s appointment defines the Times’ public editor job as “to represent readers and respond to their concerns, critique Times journalism and increase transparency and understanding about how the institution operates.”

Columbia Journalism Review published a Q & A with Sullivan, in which Sullivan said “there was mutual interest” in her becoming public editor.  Sullivan said, “I made an overture, and I found out that they were already considering me, so it worked out well that way.”

We wrote in May when the Washington Post‘s Erik Wemple reported Brisbane would be stepping down instead of taking the “one-year option” to stay longer in the job. Shortly after Brisbane’s appointment in 2010, Daily Finance and the Women’s Media Center questioned the lack of diversity in the Times‘ public editors.  Prior to Sullivan’s July 2012 appointment, the previous four public editors, including Brisbane, were white men.

Guardian: Comment 'could have been interpreted as being of a sexual and vulgar nature'