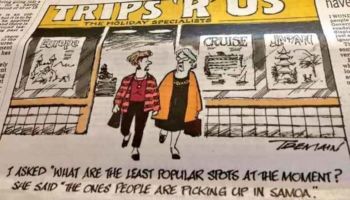 The Otago Daily Times, a newspaper in New Zealand, offended readers with a cartoon about the measles outbreak in Samoa. More than 50 people, mostly children, have died in Samoa from measles; there have been about 4,000 measles cases since October, according to the Samoan government.

The cartoon showed two women walking out of a travel agency called “Trips ‘R’ Us.” One woman says to the other: “I asked ‘What are the least popular spots at the moment? She said ‘The ones people are picking up in Samoa.”

In a Dec. 3 apology, the paper said, “The content and the timing of the cartoon were insensitive, and we apologise without reservation for publishing it.”

According to the paper’s editor, Barry Stewart, the cartoon was a “deeply regrettable error in judgment” for dehumanizing the crisis.

The cartoonist was Garrick Tremain, according to Newshub. Tremain told iMediaEthics by e-mail he stands by his cartoon. He told First Up in part,

“If you’ve read the cartoon, the basis is a travel agent taking the wrong end of the stick and making a stupid comment.

“I can quite understand why it has upset people. It’s a very poor piece of timing for such a cartoon – I’m the first to agree with that.