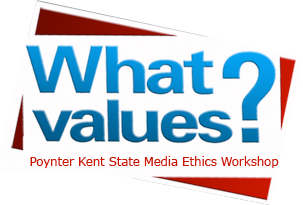 Last month, at the fifth annual Poynter Kent State Media Ethics Workshop, Poynter Institute colleagues discussed the role of traditional media, frequently referred to as the Fourth Estate, and new media, which has been given the sequential moniker, the Fifth Estate.

In the first session of the event, a panel looked at the Poynter Sense-Making Project, an ongoing study that began this year and examines “the influence of the Fifth Estate, described as ‘sense-makers who are informing much of society today.'”

Poynter Ethics Group Leader Kelly McBride introducted the panel, which also included Bob Steele, the Nelson Poynter Scholar for Journalism Values, and Ellyn Angelotti, interactivity editor and adjunct faculty at Poynter. In her introducation, McBride described the goal of the study as an attempt to understand how democracy will function when a new media landscape emerges. To that end, the Sense-Making Project looks at the values emerging in the Fifth Estate and the vales of the Fourth Estate, and how they affect each other.

According to Leach and Gilbert’s article, the Sense-Making Project is already showing some trends, many of which seem intuitive for those who regularly interact with new media. For example, the project has found that, “…the Fifth Estate is a viable, albeit still poorly defined, part of the media landscape,” which McBride believes contributes to its reputation as “amateur or semi-professional.”

To read more about this differences and interaction between old and new media, you can read Leach and Gilbert’s article here or watch the entire panel discussion here.