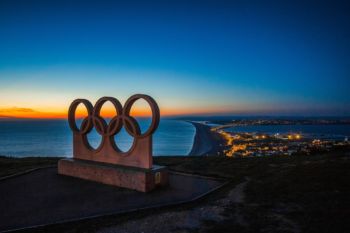 During the Winter Olympics opening ceremony, NBC’s co-host Katie Couric said that the Dutch are “really really good at speed skating” because “skating is an important mode of transportation in a city like Amsterdam, which sits at sea level, as you all know, and has lots of canals that can freeze in the winter.”

“So for as long as those canals have existed, the Dutch have skated on them to get from place to place, to race each other and also to have fun,” she said.

Couric apologized Feb. 12 for her comments. “Congrats #Netherlands on your [medal] count so far!” she tweeted. “My apologies for being on thin ice for my comments re: skating on canals. I was trying to salute your historical passion for the sport but it didn’t come out that way! I’d [love] to visit again & celebrate your success!”

The Netherlands embassy in the U.S. accepted her apology in a tweet.

NBC skiing analyst Bode Miller also apologized on air for”an ill-advised attempt at a joke.” He said Austrian skiier Anna Veith, who had knee injuries in recent years, could be having problems because she just got married.  He said, according to the Mercury News:

“The knee is certainly an issue. I want to point out that she also got married, and it’s historically very challenging to race on the World Cup with a family or after being married. Not to blame the spouses, but I just want to toss it out there that it could be her husband’s fault.”

Miller apologized shortly after his comments, according to the Boston Globe, adding that:

“I was an athlete that competed after marriage and I know how beneficial it is. I know the support team you need. I relied on my friends and family. And if you have the luxury of relying on a spouse, I know they are inevitably your biggest supporter. And on Valentine’s Day, I didn’t mean to throw spouses under the bus. Certainly, I’m going to be hearing it from my wife, I know.”

He continued apologizing on Twitter, saying, “To be clear I was not seriously blaming Anna Veith’s lack of results on her husband. It’s a changing of priorities that is historically hard, male or female.”

iMediaEthics has written to NBC Sports for more information.

NBC already apologized for analyst Joshua Cooper Ramo’s comments during the opening ceremony. Ramo upset many Koreans when he said “every Korean will tell you that Japan as a cultural and technological and economic example has been so important to their own transformation.”

Congrats #Netherlands on your 🥇count so far! My apologies for being on thin ice for my comments re: skating on canals. I was trying to salute your historical passion for the sport but it didn’t come out that way! I’d ❤️ to visit again & celebrate your success! 🇳🇱 https://t.co/NvYi7LwB2V

We’re letting it slide @katiecouric 😉 and apologies accepted! Enjoy the rest of the Winter Olympics (with hopefully more Dutch medals). We’d love to help you visit the Netherlands to talk about where we’ve been and show you where we’re going. Just say when, and we’ll be there! https://t.co/qD5SIqHS9l

To be clear I was not seriously blaming Anna Veith's lack of results on her husband. It's a changing of priorities that is historically hard, male or female.

I had the love and support of my wife while I was racing and I know it can be a huge asset. #happyvalentinesday