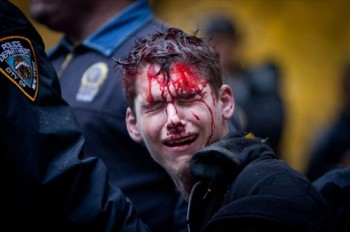 A few days after the Nov. 15 raids of the Occupy Wall Street movement’s initial camp at New York’s Zuccotti Park, a photo of Brandon Watts, a protestor whose face had been bloodied by the police, was splashed all over the media. Editors used the photo to highlight the police brutality associated with many Occupy Wall Street actions.

But the photojournalist who took the photo, Andrew Burton, a freelancer who was working for Getty Images that day, told iMediaEthics by phone that in this case, the photo didn’t — couldn’t — tell the whole story. Burton told iMediaEthics:

“The photo sensationalizes the totality of violence for the day – it was a largely peaceful day, yet the photo suggests otherwise. It’s an isolated incident.”

iMediaEthics examined Occupy Wall Street coverage to discuss what happens when photographers fail to identify subjects of photos in their captions: The reader is left without key information, and stories are incomplete.  But what roles do picture editors play in the process? What about photo selection? Those matter as much as caption information when it comes to telling a complete story.

Burton said the photo did not show it, but Watts, the bloodied featured subject, “was antagonizing the cops, and in this case, they were probably justified in stopping the protestor from antagonizing them further. They weren’t justified in beating him to the extent they did,” in his view.

So why wasn’t that information in the caption?

“I could not verify what this kid was doing – I wrote what I absolutely knew,” which included his name and what was happening that moment, Burton told iMediaEthics.

Deadlines kept Burton from being able to get any more information about what happened. With the chaos at the scene, it’s likely that Watts didn’t attract attention until blood was pouring from his face anyway.  Check out a video of the whole incident here (starting about the 2 minute mark).

Regardless, the rest of the story remained untold in pictures. It’s not all violent.

Often, an Occupy Wall Street action consists of eight hours of relative inaction punctuated by a half hour or so of intense, sometimes violent action. What about photos from those other 7.5 hours?

“I transmit photos from those other 7.5 hours of big protests, and frequently those are my favorite photos,” Burton said. “But those aren’t frequently used because they aren’t the peak action of the day.”

Indeed, most of the coverage of that particular day ran with only that one photo.  As examples, check out the NewYork Daily News and New York Post’s coverage.

Photo editors, in choosing the photos to run with a story, indicate they have been taking the Occupy Wall Street movement less than seriously — when you have someone with bright blue hair antagonizing police, it makes for a better photo than, say, a general assembly meeting or a person in a polo shirt with a sign. While it’s up to the reader to decide whether to take the movement seriously or not, editors are not giving them all of the facts. If one photo can’t tell the whole story, than a caption or more photos should finish the job. Readers can’t make informed decisions without this context.

Photo editors have limited space in print, and so Watts was the obvious photo choice. That doesn’t excuse Web editors, however, who have entire photo galleries and more space for words at their disposal to tell the whole story. The stories highlighted above, particularly the New York Post article, make it a point to chronicle the violence of the day, but not necessarily the mostly peaceful parts of the protest.

In the absence of extra space, captions can do the heavy lifting – giving readers context of the rest of the day’s mostly peaceful nature, though even these, too, often get cut down by wire editors on deadline when there’s little room on the page.

“My bigger frustration here is, in comparison to other social movements, Occupy was relatively safe,” Burton said, noting that the one picture of a bloodied Watts didn’t show that.

And Burton should know – he’s covered the Arab Spring and the birth of South Sudan – far more dangerous situations than a few people in a park in lower Manhattan.

Looking at photos from nine months of Occupy Wall Street protests, it’s easy to believe that most of the protestors are either ’60s-era former Vietnam War protestors, homeless people, or disheveled rabble – often with neon-colored hair, multiple piercings and several tattoos.

It’s easy to believe because that’s (mostly) all you can see in the media depictions. But that’s not the whole picture.

Chris DeMey, of Phoenix, Ariz., sings at Manhattan’s Zuccotti Park on Sunday, Oct. 23, 2011. DeMey said that the economy cost him a job two days ago and so he decided to join the Occupy Wall Street Protests in Manhattan. Photo by Wasim Ahmad

The de-legitimization of what, at times, is a large group of protestors is carried out further by the sometimes lackadaisical attitude of the journalists capturing their actions.

When people with names are reduced to “an Occupy Wall Street protestor” in a caption the reader has less of a chance of connecting with them than if the caption read “Chris DeMay, a construction worker from Phoenix who recently lost his job and decided to join Occupy Wall Street.”

When a photojournalist or writer talks to the stoned person beating a trash can and avoids the more rational crowds, the reader isn’t getting the whole story.

How to fix it

Photo editors need to work with editors to make sure images are contextualized both in captions and the story itself, when they can’t fit all of the photos needed to tell the story in a given space.

For starters – it couldn’t hurt to take a look at those other photographs that Burton and company send along when covering the story – indeed there are several shots that he included from the day that show some of the peaceful aspects, including here, here, here, and here.

Including some extra information in the captions is another way to tell the whole story – The caption from Getty of Burton’s photos reads:

“NEW YORK, NY – NOVEMBER 17: A man who identified himself as Brendan Watts is seen with blood on his face while surrounded by three police officers in Zuccotti Park on November 17, 2011 in New York City. A fight broke out between protestors affiliated with Occupy Wall Street and police, in which Watts was injured. (Photo by Andrew Burton/Getty Images)”

So what about the rest of the time there wasn’t a fight?  This is information that can be added at any point along the imaging chain – whether from the photographer, the editor putting the photo on the wire, or even the page designer adding an image to a page. It lets an editor choose the one dramatic photo and still inform the reader about all of the day’s events.

And then there’s always the approach NPR had for the story – a news blog in addition to the coverage. Starting here, the reader can scroll through the day’s posts – reading about both the violent and the peaceful parts of the protest to draw conclusions from.

High points of drama are the obvious, sensational shots.  More difficult is to capture a news event in a single shot that stimulates readers to understand the other 7.5 hours of an 8 hour protest.