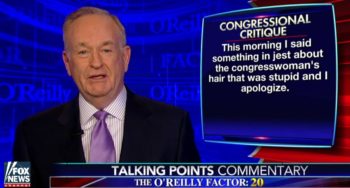 Fox News’ Bill O’Reilly said he couldn’t pay attention to what Rep. Maxine Waters (D-CA) was saying in an interview clip because he was too busy “looking at the James Brown wig.”

O’Reilly’s comments weren’t made during his own opinion show, but rather during a March 28 episode of Fox & Friends.

Two Fox & Friends co-hosts, Steve Doocy and Brian Kilmeade, appeared to laugh off-camera at the tasteless remark, but one, Ainsley Earnhardt, told O’Reilly “you can’t go after a woman’s looks,” to which he said, “I love James Brown, but it’s the same hair.”

The clip is here:

A Fox News spokesperson pointed iMediaEthics to O’Reilly’s remarks about the incident.

At first, O’Reilly issued a statement apologizing for his “dumb” comment.

“As I have said many times, I respect Congresswoman Maxine Waters for being sincere in her beliefs. I said that again today on Fox & Friends calling her ‘old school.’ Unfortunately, I also made a jest about her hair which was dumb. I apologize.”

Then, he addressed the issue on his show The O’Reilly Factor, saying that he made a “mistake.” Video is here.

“I said in a simple jest that the congressman’s hair distracted me,” O’Reilly said. “Well, that was stupid. I apologize.”

“It’s unnecessary to poke fun at anyone who is speaking from the heart in the public arena, in my opinion. But it is necessary to analyze what is being said,” he went on.

He then made “a lengthy broadside against Ms. Waters,” according to the New York Times, calling for her to come on the show to discuss her problems with Pres. Trump.

For her part, Waters tweeted, “I am a strong black woman. I cannot be intimidated, and I’m not going anywhere. #BlackWomenAtWork”

I am a strong black woman. I cannot be intimidated, and I'm not going anywhere. #BlackWomenAtWork

She repeated those comments in an MSNBC interview with Chris Hayes. She added that she isn’t “responding to” O’Reilly and that he has “no credibility,” according to the New York Times.

.@MaxineWaters on Bill O'Reilly comments: "I am a strong black woman and I cannot be intimidated" #inners https://t.co/B1vRE4nelt

iMediaEthics has written to Rep. Waters’ office for any further comment regarding O’Reilly’s remarks and if Waters has accepted O’Reilly’s apology.

This isn’t the first time a “racially charged remark” was directed toward Waters, CNN’s Tom Kludt noted. Fox’s Eric Bolling commented in 2012 she should “step away from the crack pipe.”