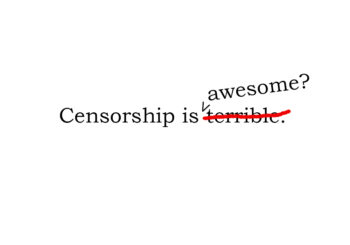 The newspaper and ad agency Grey Singapore created a “Free My Voice” campaign that included “an algorithm that automatically flipped the meaning of commenters’ posts, and applied it to comments beneath a controversial article about the Islamic country’s blasphemy law,” according to Ad Week.

For example, if someone commented positively, the algorithm changed it to make their comment negative.  In its promotional video, the Daily Times showed the comment “The author is correct. The current laws in Pakistan are a distortion of Islam” is changed to “The author is wrong. The current laws in Pakistan aren’t a distortion of Islam.”

In its own story on the project, the Daily Times wrote, “censorship is nothing new” and noted the International Federation of Journalists’ listing of Pakistan as “the fourth most dangerous country for journalists.”

“For the longest time, Pakistanis have been clamouring for the abolition of their country’s biggest threats to free speech — the blasphemy law,” the Daily Times wrote. As an example, the newspaper had the algorithm change comments on an April 17 article about the law.

“As the readers shared their thoughts regarding the issue, their statements were altered, real-time, on the medium they would least expect censorship to happen – the comment box,” the Daily Times explained.

“View the video here: Free My Voice. An intelligent program embedded in the comment box made them experience censorship first-hand to make them feel the frustration of what it is like to lose the fundamental right to free speech. No matter how many times they tried retyping their original comment, the result was still the same.”

The Daily Times quoted its publisher Shehryar Taseer, who wrote the April 17 article about the decision to alter the comments.

“We wanted to highlight the importance of being able to express one’s view and not take freedom of speech for granted. I think we all have to take a stance against censorship. How else are we going to move forward towards a more liberal Pakistan, towards a Pakistan that will tolerate differing opinions and a place where people can feel safe and secure when they speak or write about a multitude of topics? Freedom of speech is not just a country specific or regional issue –this is a global issue.”

iMediaEthics has written to the Daily Times and Grey Singapore.