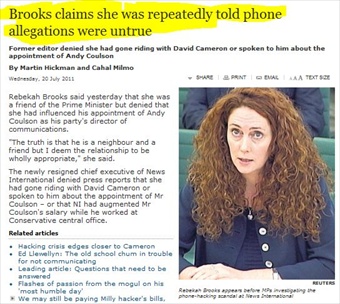 After Rupert Murdoch and James Murdoch’s testimony in front of Parliament yesterday, former News International CEO and former News of the World editor Rebekah Brooks testified.  While the Murdochs’ testimony “was meant to last an hour. It lasted three,” according to the Guardian.

Brooks resigned from News International July 15, one week after the announcement that News of the World would close.

According to the BBC, Brooks apologized for the hacking, which she called “pretty horrific and abhorrent.”

Brooks specifically addressed the Milly Dowler hacking but denied that she knew the newspaper reportedly hacked the murdered teenager’s phone until the Guardian broke the news in early July, according to the Guardian.  Brooks was editor of News of the World when Dowler was kidnapped and killed. She reportedly responded to the news that her newspaper at-the-time hacked the girl’s phone by apologizing to the family and feeling “shock and disgust.”

In her testimony, Brooks denied having “knowingly sanctioned payments to police,” according to the Guardian.  News International may be investigated for bribery charges, the Guardian reported.

In a 2003 testimony before Parliament, Brooks had stated “We have paid police for information.” In April, she backed away from those claims, stating she didn’t know of any “specific cases” where the police were paid.  Instead, Brooks claimed she was trying to “comment generally” on media paying police.

Brooks suggested that News of the World isn’t the only newspaper to have a “closeness” in its “relationship” with police and politicians, the Guardian reported. She also claimed she “was very willing to come” to the hearing.

Regarding her relationship with News Corp.’s Rupert Murdoch, Brooks said she “would talk to Rupert Murdoch, on average, every other day.”  In Murdoch’s testimony yesterday, he admitted he is “not really in touch” with his editors.

Brooks denied telling Boris Johnson the scandal ” would not be over until Alan Rusbridger, the Guardian’s editor, was on his knees.” Johnson is the mayor of London.

She said she “does not know” who hired or OK’ed the hiring of Jonathan Rees, a “private investigator for an empire of tabloid corruption,” according to a March 2011 report by the Guardian’s Nick Davies. In that article, Davies reported that in 1999, Scotland Yard bugged Rees “gloating about the pay he received from the News of the World,” a sum of “more than £150,000 a year.”

Journalism.co.uk noted that Brooks called on the Parliament ” to invite her back once she is “free from the legal constraints she is under today, to enable her to answer in more detail.” Brooks also admitted “mistakes” were made.

Brooks was arrested July 18 to be questioned “in connection with allegations of corruptions and phone hacking,” and was released on bail. According to Reuters, Brooks is to “return to a London police station on a date in late October.”

BBC called Muslim gesture an ISIS salute
Corrections: The Roomba didn't do it! Irish Libel Law, Irish or British, How many Troops Abroad?