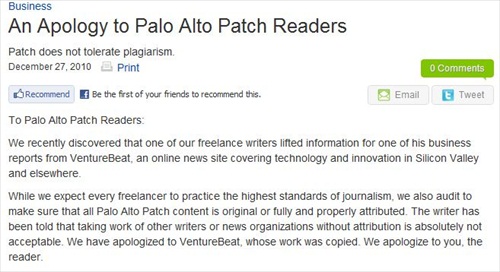 A Patch website has apologized for plagiarizing text from online news site VentureBeat, Media Bistro’s Fishbowl LA reported. Patch is an AOL-company that provides a “community-specific news and information platform” via its hyperlocal sites.

The Patch site, Palo Alto Patch, noted in the apology that the writer who plagiarized was a freelancer.  The apology stated:

“While we expect every freelancer to practice the highest standards of journalism, we also audit to make sure that all Palo Alto Patch content is original or fully and properly attributed. The writer has been told that taking work of other writers or news organizations without attribution is absolutely not acceptable.”

Patch also apologized to VentureBeat and its readers.

“Palo Alto Patch did the right thing in acknowledging the incident and issuing a swift apology,” Fishbowl LA commented, comparing the apology with a Sept. incident when a blogger claimed a Patch writer lifted part of an obituary she penned.  The blogger, Alissa Walker, claimed that the Patch editor responded to her claims of plagiarism not apologizing, correcting or retracting, but asking for more information to add to the obituary.  However, “the obit was eventually taken down and the author fired,” Fishbowl LA noted.