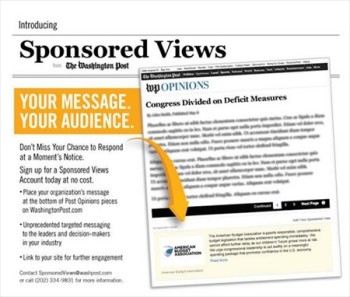 Washington Post sells "Sponsored Views." You can pay to have a comment posted at the top of the reader comments section with a link to any web page you would like to feature. (Credit: Washington Post, screenshot)

Last month, the Washington Post revealed a new moneymaking scheme that would allow individuals and organizations to buy comments posted underneath op-ed articles on its website.

In its June 12 announcement, the Post described the program, which is called Sponsored Views, as a “feature that invites organizations to post commentary related to or in response to content from The Washington Post’s Opinion section.”

Patrick Pexton, who served as ombudsman for the Post from 2011 until the position was eliminated March 1, discussed the program and its implications with iMediaEthics.

What Are Sponsored Views?

The program provides “advocacy, communications, and government affairs professionals” with the opportunity to “place their message in front of key constituents,” according to the Post’s announcement.

13- to 18-year-olds who have parental permission may also purchase Sponsored Views, but more on that later.

The “Views” appear above reader comments on the article. According to the Washington Post, “Sponsored Views will be clearly labeled as advertising,” and they are only published in response to op-ed pieces, not news stories.

The section on the Washington Post site pitching the program says that responses can include as many as 600 characters, the logo of the organization that is sponsoring the “View,” and a URL to direct readers to the organization’s site. According to the Wall Street Journal, the price of a Sponsored View ranges from $500 to several thousand dollars.

Sponsored Views are set apart from other content with a pale yellow background. See image below. The term “SPONSORED VIEWS” appears above the comment on the top left, in small lettering. Next to this is a small icon that, when moused over, reveals a short summary of the program.

Sponsored Views would allow organizations not only to place advertisements underneath editorials, but to also potentially partake in PR damage control.

If, for example, the Washington Post publishes an editorial about a newspaper scandal, that newspaper’s editors could attempt to post a Sponsored View about its ethical code in an effort to distance themselves from the event.

Or, if corporations are allowed to post Sponsored Views, an oil company such as BP could respond to an op-ed about a spill it caused with a comment discussing the company’s plan to bolster measures to prevent future spills. Given the “pay-to-play” aspect of Sponsored Views, the entities with the deepest pockets, such as BP or Exxon, et al., will be more likely to utilize this feature than Joe or Jane Six-Pack.

The June 12 announcement provides some examples of Sponsored Views from “charter sponsors” that were used to help launch the program.

On a May 19 Post op-ed about the need for legislation designed to increase cyber security, the CTIA Wireless Association, which is a trade group that lobbies on the behalf of the wireless telecommunications industry, published a Sponsored View.

Above, a screenshot of The CTIA Wireless Association’s “Sponsored View” has been enlarged and three red circles have been added. In the top left red circle is the term “SPONSORED VIEWS” with an icon that shows a brief summary of the program when moused over and includes a link to a page pitching the program. In the top right red circle is a link to a purchase request form to buy a Sponsored View. The bottom red circle shows the  “read more” link that is part of the advertising deal and leads to the advertiser’s website–in this example, the CTIA Wireless Association site.

The comment states, in part, that “Legislation should recognize private-public sector cyber threats collaboration as the most effective way to provide cybersecurity.”

According to the Wall Street Journal, the Washington Post invited CTIA to post a Sponsored View free of charge as part of the program’s launch.

Who Can Buy Sponsored Views?

iMediaEthics emailed the Washington Post to ask whether any teenagers had purchased a Sponsored View, as the Terms of Service for the program state that people between the ages of 13 and 18 can purchase a Sponsored View with the consent of a parent or legal guardian.

We also asked whether politicians and for-profit companies would be allowed to publish Sponsored Views, and inquired about the factors that go into determining the price of publishing a “View.”

Communication Manager for the Washington Post Jennifer Lee declined to answer to our email inquiry by writing, “I’m so sorry, but we will not be able to help this time.”

In a June 24 email to iMediaEthics, Patrick Pexton attributed the Washington Post’s decision to launch the program to the declining state of the print journalism industry.

Pexton, who left his post as ombudsman March 1 after the Post replaced the position with a part-time “reader representative,” has been a reporter and editor for 30 years and formerly served as deputy editor of the National Journal.

“The Post needs more revenue, from as many sources as it can find, to shore up declining revenues from print advertising,” Pexton wrote.

In addition to its financial reasons for pursuing the program, Pexton added that the launching of Sponsored Views is a way for the Post to “respond to advertisers who want to enter the ‘sponsored content’ game.” He described the Sponsored Views program as an “innovative” response to such demands, which are increasing exponentially.

“I think Sponsored Views and most other kinds of sponsored content, in essence, are just new words for advertorials, messages provided by advertisers in a way that looks like journalism, or slightly cloaked journalism,” Pexton wrote in his email to iMediaEthics.

The Latest in a Trend

The Washington Post’s Sponsored Views program is just one of the latest examples of what is called brand journalism.

“Brand journalism” is a term that encompasses several different advertising channels for organizations and companies to reach out to media consumers. In a Forbes article, Chief Product Officer of Forbes Media Lewis DVorkin described brand journalism as “marketers using the tools of digital publishing and social media to speak directly to consumers.”

Some academics cry foul that the practice involves the creation of cleverly disguised advertising.

“The stories may be well written and fairly and accurately reported by respected journalists…but the fundamental objective remains a marketing one. Brand journalism is always more about the brand than the journalism,” reads an article by Ira Basen posted on the website for the University of Wisconsin-Madison School of Journalism and Mass Communication.

Trying to pass off brand journalism for actual journalism rather than for what it is–advertising–is against the ethical value of maintaining a firewall between marketing and journalism content. In addition, the Federal Trade Commission has rules specifically stating that news publications must represent advertising as such, rather than dupe people into thinking that they are reading news articles.

In 2011 the FTC took ten companies to court for producing advertisements that were presented to readers as legitimate news websites. A firestorm was set off in 2009 because an iMediaEthics investigation revealed that “Eye On America” segments hosted by CBS’ Greg Gumbel were aired on various cable news networks without disclosure of the fact that they were infomercials rather than news segments. This violated the FTC’s prohibition against representing advertisements as journalism.

“No matter how you look at it, no matter how well crafted and artful, brand journalism is advertising pure and simple,” Pexton said in his email to iMediaEthics.

“That doesn’t mean it doesn’t have its place, but it ain’t journalism,” he added.

“As the industry grapples with the different definitions of sponsored content, there’s one thing everyone agrees on: Publishers must be transparent about what is and what isn’t sponsored,” wrote Sternberg.

According to Forbes’ Jeff Bercovici, The Atlantic, BuzzFeed, Forbes, and Gawker are among the numerous news outlets that utilize various brand journalism techniques in order to derive revenue.

Ashley McCollum, Senior Press Director for BuzzFeed, confirmed in a July 2 phone interview with iMediaEthics that native advertising is the site’s sole source of revenue.

One example of native advertising on the BuzzFeed site is the article entitled “18 Foods Everyone Must Try Before Leaving NYC.” This list is not unlike many of the other articles found on BuzzFeed’s website.The final item on the list suggests, “All the tasty food trucks (including Ben & Jerry’s!)”

Yet, Ben & Jerry’s is listed as the author. A link to the Ben & Jerry’s website also appears at the top, underneath which it reads “BuzzFeed Partner.”

The content produced by Ben & Jerry’s for BuzzFeed is presented as a news article, but it is actually an example of native advertising. Note: This advertisment is not editorial but directly sells Ben & Jerry’s ice cream.  (Credit: BuzzFeed, screenshot and highlight added)

The only features on the homepage that distinguish the Ben & Jerry’s article from the rest of the content produced by BuzzFeed itself is the fact that the article’s description is highlighted in yellow and the terms “Presented by Ben & Jerry’s” and “Featured Partner” appear in small lettering above the description.

Other than this, BuzzFeed offers no outright disclosure to readers that the article is, in fact, an advertisement. This is an example of native advertising because the content is formatted in the same way as a regular BuzzFeed article.

The Growth of Brand Journalism

The Washington Post‘s Sponsored Views program may be new, but it’s part of an ever-growing trend.

Brand journalism connects the print journalism industry, which is in need of revenue, with companies who are looking to convince consumers to buy their products and services with copy that appears to be objective journalism, instead of the recognizable one-sided, unobjective, traditional forms of advertising.

This is part one of a continuing iMediaEthics series featuring brand journalism and related topics.

Patrick Pexton is no longer the deputy editor of National Journal. He left that position before becoming the Washington Post’s ombudsman.