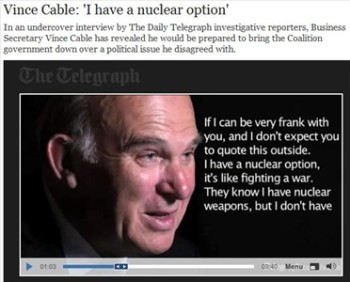 The Telegrap was censured for its undercover reporting and recording of Vince Cable (above) and others. (Credit: Telegraph, screenshot)

The PCC censured the Daily Telegraph for its undercover recording that led to Parliament member Vince Cable’s removal as head of media policy, the Guardian reported.

The PCC stated that the Telegraph violated its code of conduct for the undercover reporting  because it “did not believe that the Telegraph – although acting no doubt with legitimate intent – had sufficient grounds, on a prima facie basis, to justify their decision to send the reporters in.”

Cable reportedly stated he is “delighted” in response to the ruling.