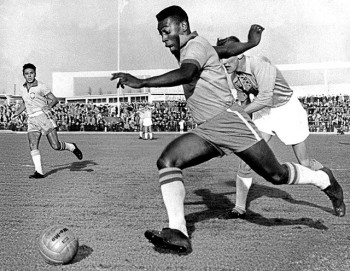 CNN apologized after wrongly reporting on one of its Twitter accounts that soccer star Pele died.

In follow-up tweets, CNN’s New Day reported that it deleted the tweet in question and that Pele is “alive and very well.”

We deleted an earlier and erroneous tweet on this topic. We regret the error and thank our followers for the feedback.

The tweet was an error, not a hack, according to The Hollywood Reporter, which confirmed with a CNN spokesperson the account hadn’t been hacked.

@AntDeRosa @ShastaCNN Get your facts right! In my tweet I say clearly in Portuguese that twitter is reporting Pele is dead. true/not?
— Isa Soares (@IsaCNN) March 28, 2014

CNN’s Brazil bureau chief Shasta Darlington also tweeted that Pele was alive. She wrote that there were “rumors” of his death, but interestingly didn’t mention CNN had itself reported Pele was dead.

Contrary to rumors, @Pele very much alive according to his press representative in Sao Paulo

Another interesting Twitter discussion about the error came from CNN International reporter Isa Soares, who tweeted:

CNN’s @ShastaCNN in Sao Paulo has spoken to #Pele’s representative who says he is alive and very well. People need to stop making up lies
— Isa Soares (@IsaCNN) March 28, 2014

Anthony De Rosa responded to Soares, noting the obvious – that CNN itself was responsible for reporting on the fake death.

@AntDeRosa @ShastaCNN Get your facts right! In my tweet I say clearly in Portuguese that twitter is reporting Pele is dead. true/not?
— Isa Soares (@IsaCNN) March 28, 2014

De Rosa then tweeted to her a photo of CNN reporting the false news, and she hasn’t apparently responded to this.

iMediaEthics has written to CNN asking how the error occurred. We’ll update with any additional information.