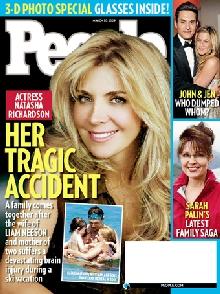 Gawker writes about People Magazine's placement of advertising on its cover--a big ethical no-no in the magazine industry. People editors wrote,"The top coverline on this week's issue features a promo line for a '3-D PHOTO SPECIAL' with 'GLASSES INSIDE!' The 'special' is six spreads of nauseating 3-D photos sponsored by McDonald's, Hewlett-Packard, Intel, and something called 'Real D 3D.' It's introduced by a page—clearly labeled a 'promotion.'"

Ideally, one of the most sacred staples of journalistic ethics is keeping the line between content and advertisements from being crossed.

As Gawker revealed, this week’s edition of People Magazine did little to uphold that value by printing a teaser for an advertisement section on its front cover. Gawker writes: “The top coverline on this week’s issue features a promo line for a ‘3-D PHOTO SPECIAL’ with ‘GLASSES INSIDE!’ The ‘special’ is six spreads of nauseating 3-D photos sponsored by McDonald’s, Hewlett-Packard, Intel, and something called ‘Real D 3D.’ It’s introduced by a page—clearly labeled a ‘promotion’—with some strange language about how Time Inc. thinks 3-D technology is changing the world and therefore they got a bunch of companies to sponsor a very strange section featuring 3-D photos.”

John Cook from Gawker, provided a link to The American Society of Magazine Editors guidelines for covers. The ASME states:

“The front cover and spine are editorial space. Companies and products should appear on covers only in an editorial context and not in a way that suggests advertisement.”

The ASME guidelines also offer advice as to why consistent separation of ads and content are important:

“For magazines to be trusted by consumers and to endure as brands, readers must be assured of their editorial integrity.”

While People magazine clearly isn’t America’s go to source for news and current events, a quick look at People.com shows that People Online is “in partnership with CNN.”  Many of People’s articles do, in fact, appear on CNN.com.  So do the relaxing ethical standards occurring at People also apply to CNN?  While many do not take People to have serious journalistic merit, many do take CNN as a trustworthy news provider.  However, the question becomes: If CNN is allowing outlets with falling standards to be mirrored on their site, what does that really say about their commitment to quality journalism ethics?

While, as Gawker points out, times are tough for magazines that remain in the game, compromising quality is no way to maintain a dedicated following.  Readers aren’t stupid and they’re not afraid to move on: The trivializing of boundaries that now allow the conflation  of editorial with advertising on the front cover give the impression of eroding ethical values. Such conflict of interests are yet another reason why consumers have grown dissatisfied with mainstream media and are increasingly preferring blogs and grassroots news organizations as trustworthy alternatives.