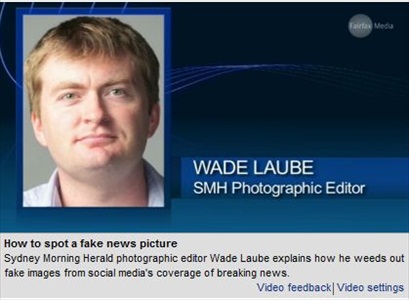 Since last week’s earthquake and tsunami in Japan, there have been a “sickening tsunami of faked photos,” the Sydney Morning Herald observed.

The SMH’s photo editor, Wade Laube, explained that right after the tsunami, members of the public were posting picutures on social media sites like Twitter, “more than an hour before anything became available through the news wire services.”

Laube advised that “if a picture seems too good to be true, it probably is.”  According to Laube, the photo department checks the authenticity of a photograph in a variety of ways, including comparing the image with historical images of similar storms, crowdsourcing, seeing what’s been posted about the image on Twitter, and talking to actual eyewitnesses.

As examples of faked photos linked to major storms, Laube included an image of tourists watching “the results of a tidal bore on the Qian Tang Jian River in China” that was passed off as a an image from the 2004 Boxing Day tsunami.

Another misrepresented photo Laube included was labeled an image of the February cyclone Yasi but ended up being a photo that was two years older than the cyclone.

And, Laube included a doctored photo that was on social media sites and posed as an image from the 2011 Japanese tsunami .

StinkyJournalism reported last fall when TIME magazine was hoaxed by a photo on Twitter labeled an image of a Sept. 16, 2010 storm that hit New York City.  But, the photo was from 1976 and posted by Twitter-user “The Dave Carlson,” who wanted “to pull a prank on my friends.”

iMediaEthics also wrote in 2008 when photos of the 2002 Chinese tidal wave were captioned as from a 2005 tsunami in Thailand.  The photos were posted online by the Press Trust of India, and published by “several television channels and newspapers including the Times of India, the Calgary Herald and German paper Tz.