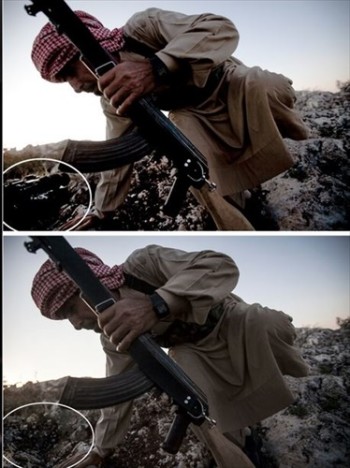 See a comparison of the original version (top) and the doctored version (below). (Credit: AP, screenshot)

The Associated Press fired one of its freelance photographers for doctoring a photo taken in Syria.

In an AP press statement, the news organization said that  the photographer, Narciso Contreras, Photoshopped a September image he submitted to the AP to delete a video camera. The AP explained what Contreras did:

“The action involved the removal of a video camera seen in a corner of a frame showing a Syrian opposition fighter taking cover during a clash with government forces.”

Contreras admitted that the doctoring was “the wrong decision,” according to an Associated Press news story.  “I took the wrong decision when I removed the camera … I feel ashamed about that,” Contreras is quoted as saying.

He went on, “You can go through my archives and you can find that this is a single case that happened probably at one very stressed moment, at one very difficult situation, but yeah, it happened to me, so I have to assume the consequences.”

The AP press statement quoted its Vice President and Director of Photography Santiago Lyon as saying:

“AP’s reputation is paramount and we react decisively and vigorously when it is tarnished by actions in violation of our ethics code. …Deliberately removing elements from our photographs is completely unacceptable and we have severed all relations with the freelance photographer in question. He will not work for the AP again in any capacity.”

Lyon reviewed “nearly 500 other photos by Contreras distributed by the AP” but didn’t find any fakery. But, the AP won’t sell any of his past work moving forward.

“Contreras was among the five photojournalists whose images of the Syrian civil war in 2012 earned AP the Pulitzer Prize for Breaking News Photography in the spring of 2013. The image that he subsequently altered was taken on Sept. 29, 2013.

“AP has notified the Pulitzer board that an image taken a year after the prize was awarded was flawed, but that none of the images in AP’s prize entry, including six by Contreras, were compromised in any way.”