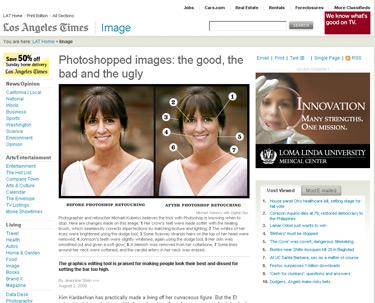 Scott Kelby, president of the National Association of Photoshop Professionals (yes, there is such an organization!), tells The Los Angeles Times that he believes “every single major magazine cover is retouched.”

“Aside from U.S. newspapers, most of which do not permit photos to be manipulated,” Los Angeles Times reporter Jeannine Stein writes, “it’s quite possible that the vast majority of images seen in the public arena have been altered.”

Stein’s feature story, which appears in today’s Los Angeles Times, quotes Kelby and others, painting a picture of a media landscape dominated by the troubling use of Photoshop photo doctoring. Both the causes for its nearly universal use and the resulting social consequences are explored.

“Photoshop,” Stein writes, is “the go-to graphics editing program that got a foothold in the 1990s.” It “has become so ubiquitous that most of us gaze at faces, bodies and landscapes, not even registering that wrinkles have been diminished, legs lengthened and the sky honed to a dream-like shade of blue.”

The nut of the Times’ story? There are two sides of an ongoing debate. Stein writes, “Photoshop’s popularity has proven to be divisive. While some laud it for its ability to allow people — and things — to look their best in a photograph, others see it as a vehicle for feeding our culture’s desire for uber-perfection.”

Amy Dresser, a “top freelance retoucher in Los Angeles” demonstred how she uses Photoshop for The Times’ reporter who writes, Dresser “deftly zaps a few small moles and then peers at a small white patch just below the model’s eye before obliterating that too.”

The Times continues, “‘I think one of my main objectives,’ she says, ‘ is to erase distractions…She adds, ‘I don’t have a rule that a mole near her armpit equals bad. It’s really case by case. I don’t think anything is universally bad.'”

In what may be a window into the reality on the issue, and an object lesson at the same time, the reporter reveals in the last words of the report that Dresser had “recently joined an online dating site, and posted a photo of herself. Was she tempted to Photoshop it?”

She answers, ” ‘I just adjust color — that’s my personal rule. Obviously I can retouch myself to look different, and I’m aware of how a person can look different in two different photos. So I try to find a photo of me being me.’ “