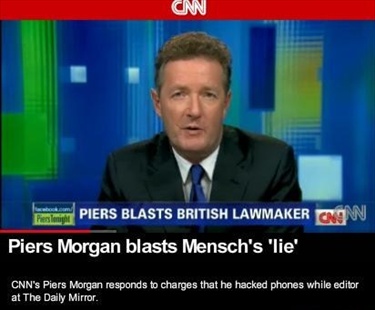 CNN News anchor Piers Morgan is calling for Parliament member Louise Mensch to apologize for linking him with phone hacking, the AFP reported.  Morgan was editor of News of the World from 1994 to 1995.  He was editor of the Daily Mirror from then until 2004.

However, Mensch said she wouldn’t apologize, according to the AFP.

Mensch commented in Parliament July 19 that Morgan “boasted” about using phone hacking in his book the Insider, the AFP reported.  As the BBC explained, Mensch’s Parliament comments were made both during Rupert and James Murdochs’ testimony and Rebekah Brooks’ testimony.

However, she wouldn’t “repeat her claim” outside of Parliament, where she had parliamentary privilege, according to the AFP.   Morgan denies writing that he “used phone hacking himself” in that book.

“I’m amused by her cowardice in refusing to repeat that allegation now that shes not in Parliament covered by privilege,” Morgan is quoted as saying. Morgan also denied hacking.

The Telegraph noted that Mensch “misquoted” Morgan’s book. While Mensch stated Morgan “boasted that using that ‘little trick’ enabled him to win scoop of the year on a story about Sven Goran Eriksson. So there is a former editor of the Daily Mirror being very open about his personal use of phone hacking.”

But, according to the Telegraph, Morgan actually wrote about how he thought his phone was hacked.

The Washington Post noted that Morgan took to Twitter to counter claims of hacking. Morgan  tweeted that he “never hacked a phone, told anyone to hack a phone, or published any stories based no the hacking of a phone.”

News Corp has stopped paying the legal fees of former News of the World private investigator Glenn Mulcaire, Press Gazette reported.  In Parliament, James Murdoch “admitted for the first time” that News International was still paying Mulcaire, who was convicted in 2007 for phone hacking.

And, the Los Angeles Times reported that UK Prime Minister David Cameron has stated that he “regretted hiring” Andy Coulson, a former News of the World editor and his communications director from 2010 to early 2011.

The Guardian reported that Jonathan May-Bowles, who is “accused of throwing a paper plate of shaving foam at Rupert Murdoch” July 19, was charged “with a public order offense.”  May-Bowles is also known as Jonnie Marbles. The shaving foam pie was thrown at Murdoch July 19 during the Parliamentary hearing.

The Telegraph reported that May-Bowles “is a seasoned left-wing campaigner who occasionally performs as a stand up comedian.” and is “loosely attached to a number of political organisations.”