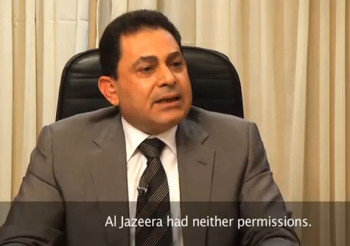 FARAG FATHY FARAG, LAWYER, CAIRO: When you work in Egypt you need two permissions—One of them is [for individual journalists] from the State Information Services and a permission for the TV channel to transmit live from Egypt to take a camera and walk in the streets filming and transmitting to satellite live you need a permission from the Media City.

Al Jazeera had neither permissions.

The only permission was for the international news channel. It was I who obtained it for them in 2011.

And it was cancelled by court at the end of 2013

The way Mubasher Misr [Egypt Live] works by sending equipment called TVU and which is smuggled through Libya, Ghaza, or hidden within suitcases through Cairo airport.

The TVU looks like a laptop computer which can be operated while walking in the street or in a live demonstration. Also they deliver to every employee or collaborator a telephone called Thuraya.

The use of this phone is not permitted because calls go through satellite and out of the local network. They deliver these phones to unemployed persons whom they call “collaborators.

This collaborator takes the phone and goes, for example, to the city of Fayoum to film people hired to demonstrate.

And all the private channels [that] are working in Egypt.

Ask yourself, why is only Al Jazeera put in jail?

This video transcript is part of iMediaEthics’ investigative series on international media reporting on Egypt.
iMediaEthics’ editor-in-chief and publisher, Rhonda Roland Shearer, spent much of May and June in Egypt reporting for this series. She worked with Nader Gohar and his CNC team to produce video reports for iMediaEthics .

Editor’s Note: Learn more about the charges Farag levied in iMediaEthics’ investigative report. Al Jazeera’s lawyer in New York, Frank W. Ryan of DLA Piper, wrote in a Sept. 25 letter to iMediaEthics that “any allegations” Farag made “are false”. Ryan provided no evidence to support this sweeping statement and declined to respond to follow-up questions. Egypt, by contrast, is taking these revelations seriously. The International Cooperation Office of the Egyptian Prosecutor General confirmed by email to iMediaEthics that “the Egyptian Prosecutor General will verify allegations by Mr. Farag by judicial investigation.”

Who is Farag Fathy Farag?

Farag is the CEO of Farag Law Firm based in Cairo, Egpyt. He is a high-profile criminal law and corporate lawyer in Egypt and the Middle East who represented imprisoned Al Jazeera journalists Peter Greste, Mohamed Fahmy, and Baher Mohamed until quitting in court this year. Farag helped the international channel attain its broadcasting license in Egypt in 2011 before its cancellation by the Egyptian Court in 2013.

Clients include major banks, airlines, gas and oil companies, and media outlets. He attended Cairo University for a Faculty of Law, LLB and a Criminal Law, LLM.

MORE RELATED TO THIS STORY