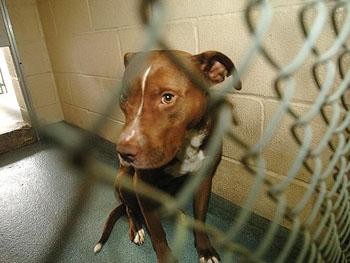 Buffalo-area media outlets reported the “bizarre and disturbing” story of a pit bull raping a two-year-old.

That wasn’t the unusual part. Scary stories about pit bull attacks appear in news coverage almost as regularly as weather forecasts.What made this one so strange, though, was the mother’s claim that the dog allegedly anally raped her two-year-old son.The toddler is in guarded condition in Buffalo’s Women’s & Children’s Hospital after undergoing reconstructive surgery.  The dog is locked up in the Niagara County SPCA, and the mother’s demanding that it be euthanized as soon as possible.

In an interview with Detective Larry Eggert of the Lockport Police Department, the WBEN news anchors tried to treat the matter with a sense of propriety. “This is a very delicate question,” the anchorman said. “I’ll try to approach it as sensitively as I can, but did you check with a veterinarian? Are animals ever sexually attracted to human beings?” The detective answered that the department had to search outside New York State to find an animal behaviorist who, apparently, has investigated “five” such cases.

Strangely, the anchors did not reveal what this expert discovered, or ask about the credentials of the person.

Even if all five of those cases turned out to be actual rapes of small children by dogs, and there’s no evidence that is the case, the outlets presented the story without skepticism.

Only one local paper vowed to dig deeper.  The expert evaluation of the dog’s behavior was going to be released on Saturday, June 14 in the The Lockport Union-Sun & Journal, but iMediaEthics already discovered the results during a conversation with Niagara County SPCA’s executive director, Albert Chille.

“They can’t believe that it actually occurred,” says Chille.

“This Story Does Not Add Up.”

A WIVB news report claimed that the President of the Niagara Frontier Veterinary Society corroborated the story. According to the article, an unnamed expert stated that the parents may have missed warning signs, and that a two-year-old dog reaching “sexual maturity” should not be left alone with a small child.

Her words, however, were taken completely out of context. Stephanie Wolf, the misrepresented leader of NFVS, explained that a two-year-old dog can display aggression when reaching sexual maturity. “Aggression,” she told us in an exclusive interview, “[means] biting, not raping.” She never intended to suggest that parents need to fear potential rape by their family pet.

“Just coming from the standpoint of having worked with dogs that are breeding, [getting young dogs to mate] is not an easy thing,” said a frustrated Wolf. “For a dog to have done this in a fraction of a moment, sounds to me a little strange. This story does not add up.”

There goes one expert.

WIVB also made it appear that Albert Chille, the executive director of the Niagara County SPCA, verified the credibility of the story, when in fact he contradicted it. In a news story titled “Bizarre and Disturbing Dog Attack,” they quoted Chille as saying, “My understanding is the child had no bites on him at all … I guess the message is be respectful of a dog, until you absolutely know the animal” (ellipsis original).