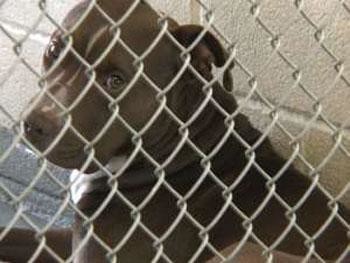 After a two-year-old boy from Lockport, New York was allegedly sodomized by a family pet, a pit bull named “Bear,” people across the nation responded with sympathy and support for the child and the dog, who is currently in the custody of the Niagara Country SPCA.

Conversations on Internet message boards showed disbelief that the dog acted alone; and citizens were concerned that it would be euthanized for the act.  However, Niagara County SPCA executive director Al Chille said he will not let that happen.

He had a lot to say about the case. iMediaEthics therefore decided to publish the full text of our interview below:

iME: I’m calling about the case of the two-year-old boy.
Al Chille: May I ask you how you found out? The reason I ask is the fact that this was on local TV and I yesterday had a call from a Gulfport, Louisiana talkshow, wanted to interview me on the talk show. It was on TV last night and I had probably 30 emails immediately afterward most of which wanted—most of whom wanted to adopt it. None of whom blamed the dog and felt sorry for the boy but blamed the parents and the household and the environment and all the other causes. And one call was from Wisconsin, one call was from Alabama I think and—

iME: Oh my God.
Chille: Yeah and it just amazed me how the word is out all over the—seems like all over the country.

iME: Yeah, well that’s the thing about the Internet. Local news reports it and every dog lover latched on to it. The news doesn’t have a location on the Internet, and it’s a pretty unusual story. The director of Art Science Research Lab actually alerted me to it. Word spreads quickly. So all over the country, you’ve been getting calls and all sympathetic to the dog?

Chille: Basically — let me just say this — I am against euthanizing the animal. I don’t know how you feel about it, but I’m sure I’ll find out in a moment. But there is still an ongoing investigation by the police department. I am holding the animal. I understand from the police department that the woman wanted—wants the animal destroyed and she was kind of in a hurry for it. And to me, I don’t like the sound of that, and I have had a lot of offers of people who would adopt the animal. In the back of my mind, I’m toying with going to a rescue group with it. As opposed to keeping it in the general area here where it has quote “a reputation,” unquote. Even though it’s probably an unearned reputation, but nevertheless it has a reputation. Also, I don’t subscribe to the attitude of a lot of people that all pit bulls are bad. I mean I can’t buy that. You got any dog, any dog that is raised in a loving environment can be a good dog, and I’ve been here 27 years and dogs, they’ve all had their day. The Doby’s had his day, that he was a dangerous and terrible dog and the Shepherd’s had its day and the Rottweiler’s had its day and so now it’s the pit bull. I think ultimately people will get to know the pit bull as a dog and not as a menace.

iME: My brother has a pit bull. One pit bull and a Doberman/Rottweiler mix. So I know that that pit bull is far from menacing.
Chille: Well, you haven’t had an opportunity to see it, but the pit bull, we did a DNA [test] on it, we took the body fluids for a DNA, and when we took the body fluids, we put a muzzle on it. But it didn’t struggle at all and the needle was put in, drove into the wrist of the dog and took maybe two or three vials of blood out and then the needle slipped. So it had to be re-inserted… and he still didn’t struggle and then took the substance from the penis, and inserted a swab in the penis. Which you and I know that would be uncomfortable.

iME: Yeah of course.
Chille: And he didn’t struggle at all, he’s just more frightened than anything else, and he apparently, I would say, if the whole story that the owner tells is true, then he did what dogs do. He just picked the wrong subject. You know what I’m saying? I’m not minimizing what happened, but if it in fact happened as it is described to us, then he just did what dogs do. And a dog a couple of years old is going into sexual maturity, so something would have attracted him to it.

iME: Have you ever heard of anything like this happening before?
Chille: Never with a child. In 27 years, I’ve heard, we’ve had reports of adults and dogs having sexual encounters, particularly females. Male, female but the situation is not—I’ve never, never heard that and I’ve never heard of a dog even being attracted. If it was an older dog, it could be a—it would be a taught thing I would think. The first question the police asked me was, “Do you think it’s physically possible?” And anything’s possible. Highly improbable from my point of view but anything’s possible, without some assistance.

iME: You said that the media has contacted you as far as Louisiana. Did any of the local reporters who are covering this story?
Chille: Oh dozens of them, two, four, seven, our three channels from Buffalo. The four newspapers, five newspapers from the area. I’ve been on the TV probably two or three times in each channel.

iME: Well, it sounds like you’re saying that this story sounds suspicious. I definitely agree with that. From the local coverage that I’ve read, no one has even brought up the suspicion. Has anyone quoted you?
Chille: The only response I’ve given to the inquiry was the police are doing an in depth investigation and I’m not going to speculate on what their investigation is. I did indicate that probably 90 to 95% of the emails that I’m getting are [from people who] want to adopt the animal. I’ll quote you one. One said, “Punish the deed, not the breed.”

iME: Do you know when the DNA results are—
Chille: No I don’t. All I know is we’re asked to produce the fluids, and we did the first day that we had the dog. And the police department came in, picked them up, and took them to the crime lab.

iME: You told me that you’ve never heard of this happening in 27 years.
Chille: No.

iME: Have any of your colleagues or anyone who you’ve contacted?
Chille: The dog presently is in Buffalo for 24 hours for a behavioral [examination], and the folks that I’ve talked to can’t believe that it actually occurred. But the lady, the mother, says that she witnessed the dog running with the child attached, and she screamed, the child screamed, the dog ran outside, and a neighbor helped her dislodge the dog, and in doing so, they damaged the child significantly. He’s had surgery and will have to have, I guess, reconstructive surgery at a later date.

iME: Oh that’s terrible.
Chille: I shouldn’t say this, but my speculation is maybe someone else did this and they blamed it on the dog.

iME: Yeah, that seems to be the possibility that the media is not mentioning.
Chille: I think the police are aware of that.

iME Well, maybe they’re playing it safe, or they just are latching onto the more bizarre, sensational story.
Chille: Well that’s right. It really is. It’s grabbed everybody’s interest or curiosity. I know there is no man living in the house. Now, whether she has a boyfriend or not, I don’t know. But there are a total of five kids. I don’t know whether any of the kids are, for example, teenagers, male teenagers or something like that. I have no clue. But I’m sure that the police are aware of that fact. The other thing is, not to be crude, but when two dogs go at it, the male dog holds on to the female with his claws on the sides. This child has no marks on the child at all. No bites, no marks, no scratches, no bruises, and it just seems to me that there would be something. But again, I avoid speculating to the press because it’s really not my place to.

iME: I completely understand. There has been speculation in Internet forums and things like that. Are you aware of the organization, SnowballsChance.org?
Chille: No.

iMe: It’s a New Orleans organization that wants to reunite Katrina survivors with their dogs. So they’re all dog lovers, and they have had a running conversation for some time. They pointed that out too. That might be where you’re getting a lot of your calls.
Chille: Yeah, well I wouldn’t be in this business if I didn’t love animals. I mean I’ve got six, almost seven years of college, and I’m a retired school administrator and I came here, told them I’ve give them five years of my life and this is my 27th year. I’m here because I love animals and, if I have it within my power, I have no intention of letting this dog be euthanized for something that may or may not have happened. And if it did in fact happen, it’s more of an innocence thing than it is—I mean doing what the dogs do and it’s unfortunate that if it did in fact occur. But the bottom line is that most people want to adopt it. The lady said she wants it put down but thus far I have avoided her simply saying that there’s an investigation going on. And now she has re-located I understand. So long as she has re-located, I can’t reach her [laughs].

iME: Oh wow, re-located, did she give a reason?
Chille: No. They said that one of the agents went to her house, and the door was shut, and the neighbors said she will not be coming back.

iME: Oh my God!
Chille: So I don’t know what the circumstances are there. But the police are aware of this so—

iME: Huh, and you’ve expressed your skepticism to the police right?
Chille: Yes, I have yeah.

iME: Okay, and as far as you’re aware, they are investigating all options?
Chille: Yes, they said they were.

iME: Okay, well—
Chille: So it’s ongoing. As far as I’m concerned, I have the dog in possession. Get it from me… or try to.

iME: Well thank you so much for speaking to me and we’re trying to get to the bottom of it because as soon as—it’s—actually the director of Art Science Research Lab has a pit bull and as soon as she read this story, she said this is preposterous. It’s—anyone who has tried to breed dogs knows that it doesn’t happen quite so easily.

Chille: Tell her that it’s not—there’s no way it’s going to be put down as far as I’m concerned personally.