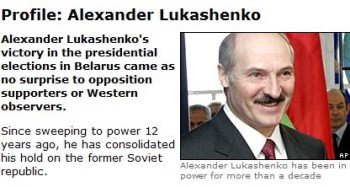 A Polish journalist was convicted of libeling Belarus' president, pictured above. (Credit: BBC)

According to the AFP, Poczobut labeled Lukashenko a “dictator” in his reports.  Poczobut, who works for Polish newspaper Gazeta Wyborcza, will face a three-year “suspended sentence” and not a labor camp.