Politico Gets It Wrong Again

Politico Gets It Wrong Again: Mixes up Quote on Rush Limbaugh 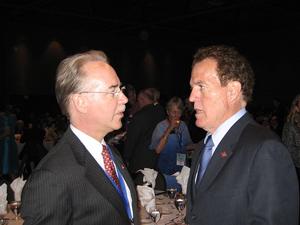 ARE US CONGRESSMEN INTERCHANGEABLE? Rep. Price on left, Rep. Gingrey, on right. Politico Reporter Jonathan Martin asked Rush Limbaugh to respond to comments from Rep. Tom Price. Problem? Price never made the comments. Rep. Phil Gingrey did. Worse, Politico did not do a proper correction.

Is one US Congressional member invisibly exchangeable with another?  You better think so if you read Politico.

Blogger Mike Dunford reports that Jonathan Martin of Politico attributed a quote to the wrong politician. Dunford writes, “Georgia Rep. Phil Gingery had given them a quote that was highly critical of Rush Limbaugh, and they somehow or another managed to attribute that quote to Rep. Tom Price instead.” At first Politico added an editor’s note to the story. Now, they’ve changed the headline and left off the editor’s note completely.

The corrected article reads, “‘I think that our leadership, Mitch McConnell and John Boehner, are taking the right approach,’ Gingrey said. ‘I mean, it’s easy if you’re Sean Hannity or Rush Limbaugh or even sometimes Newt Gingrich to stand back and throw bricks. You don’t have to try to do what’s best for your people and your party…'” Now correctly attributed to Gingery, it was originally attributed to Price.

In an earlier StinkyJournalism.org post, I suggested that Politico needs to implement better fact-checking. Because Politico distributes to other media outlets, it should be held to a higher standard. Clearly, people quote Politico stories, as Dunford did.

Rep. Price’s staff agrees. Dunford received this email from Rep. Price’s Deputy Chief of Staff (emphasis original): “’A story was published by Jonathan Martin in the Politico this afternoon WRONGLY attributes a quote to Rep. Tom Price. Rep. Price never uttered the words that were WRONGLY attributed to him and we will be demanding a full retraction. Jonathan Martin never confirmed the quote with our office. If he had, we would have been able to correct his inaccurate reporting.’”

Politico Gets It Wrong Again: Mixes up Quote on Rush Limbaugh