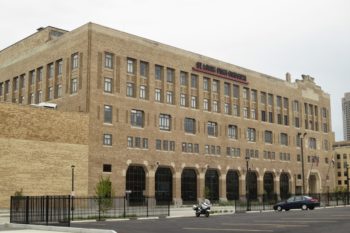 St. Louis Post-Dispatch editorial writer Stacy Washington resigned after the newspaper suspended her for not disclosing her involvement with the NRA. Washington is an NRA member and has co-hosted a show on NRA TV, but she says the newspaper was well-aware of her ties to the NRA.

Washington’s April 28 opinion column, “Guns and the media,” prompted her suspension. In her column, Washington was responding to an April 14 St. Louis American column headlined, “If we loved our children as much as our guns” and a Columbian Missourian unpaid guest commentary that compared the NRA to ISIS and concluding that the NRA was more dangerous to Americans. Washington argued that it was unfair to compare the two groups, defended the NRA against the comparison, and questioned the lack of conservative views in news reporting and commentaries.

But the Post-Dispatch said it didn’t know about her relationship to the NRA, and it suspended her for a conflict of interest. “You did not disclose in your column published today that you served multiple times as a co-host and commentator on Cam & Company on NRA TV,” Post-Dispatch editorial page editor Tod Robberson e-mailed Washington, according to the Riverfront Times. He went on:

“Advocating for the NRA while failing to disclose that you did media work on this lobbying organization and its television station goes far beyond the bounds of any acceptable journalistic standard.”

Washington argued she was “never paid” by the NRA and hasn’t hid her NRA affiliation, listing her NRA TV work on her website and social media and noted the Post-Dispatch‘s 2016 news story about her work on an NRA documentary, according to the Riverfront Times.  That Aug. 29 story was headlined, “St. Louis radio host to be featured in NRA documentary.”

Further, Washington noted that she had sent her biography to Robberson, which lists her “pundit work” and that she discussed her support for the NRA in her first column. She confirmed to iMediaEthics by e-mail that the only money that changed hands was her membership dues to the NRA and the NRA reimbursing her for expenses related to the documentary.

Washington told iMediaEthics that she had an “at will” contract with the Post-Dispatch and began writing for the newspaper in Oct. 2016. The Post-Dispatch had the option of rejecting any columns she wrote, she explained, and Robberson himself edited the column that got her suspended. According to Washington, the Post-Dispatch didn’t give her a specific length of time for her suspension, instead stating the matter would be reviewed with the newspaper’s editor and publisher. However, she decided to resign because of the way the matter was handled, she said.

“Upon learning that I had no paid affiliation or formal relationship with the NRA and that his reporter had already shared my support in the Post Dispatch, Robberson shifted the discussion from my supposed ‘NRA advocacy’ to problems in my column which he wouldn’t give specifics on,” Washington e-mailed iMediaEthics. “He insulted me repeatedly. At this point I had no desire to have my column reinstated or to continue working with him. Terminating the contract and moving on was my decision after thinking it through.” iMediaEthics has written to Washington to ask what the insults were and if they were over phone or e-mail.

iMediaEthics wrote to Robberson to ask for a rebuttal and a response to her claims that the Post-Dispatch was well-aware of her relationship to the NRA. His response? “No comment beyond what we’ve already said on the matter.”

The Post-Dispatch appended a May 2 editor’s note to Washington’s column saying her column “will no longer appear” due to a conflict of interest. The editor’s note states, “Her active promotional activities and professional association with the National Rifle Association represented an unacceptable conflict of interest in her most recent column, which resulted in our suspension of her work.”

The editor’s note went on, “Ms. Washington chose to terminate her contract. Columnists are expected to fully disclose conflicts of interest when writing about topics where such a conflict might arise. We apply this standard regardless of the lobbying or advocacy group being written about in a column.”