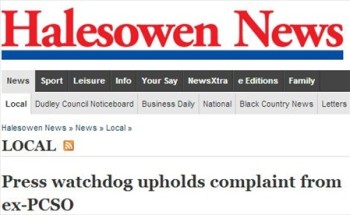 The Halesowen News and the Stourbridge News both published critical adjudications from the PCC.(Credit: Halesowen News, screenshot)

The UK Press Complaints Commission criticized two newspapers – the Stourbridge News and the Halesowen News — for being slow to answer a complaint from the subject of a story, but ruled that they didn’t break the commission’s privacy guidelines.

Newsquest, a “Gannett company,” owns both local newspapers, according to Mondo Times.  The Guardian’s Roy Greenslade added that they are “free weeklies.”

“She was ‘carving out a second career as a motor show promotions model’; she had not been paid for the photographs posted online, which had been taken as part of a hobby. She also considered that the article suggested, inaccurately, that she had left her job because of the publicity surrounding the photographs.”

While both newspapers “stood by” the reports, the PCC wrote that they couldn’t “corroborate the disputed claims” and highlighted that the newspapers took “over six weeks” to get back to Morris when she first complained. The PCC dismissed Morris’ complaint about the “publication of her name, age and area of residence” and photos, because that information was either already published or not specific enough to break the code.

“The Commission was deeply concerned by the newspaper’s handling of the complaint: it had failed to provide a substantive response within a reasonable timeframe, and it had suggested in correspondence that it could not comment on the newsgathering methods employed by the agency that had supplied the copy,” the PCC reported.

The PCC’s rulings were published on the Stourbridge News’ and Halesowen News’ websites Sept. 27.

iMediaEthics has written to Newsquest seeking further comment and will update with any response.

“The newspaper, of course, has itself accepted the Commission’s judgment and (as you say) it has already published the adjudications.

“Of greater concern, we agree, was the six-week delay in supplying the PCC with an initial answer.  PCC matters are usually the sole responsibility of editors. Very occasionally, Newsquest Media Group in-house legal will be involved in complicated or serious cases, but not in this case.  Generally, initial responses are expected and given within one or two weeks, whenever practicable, though  sometimes the PCC’s own processes as a whole can in fact take many months, regardless of how quickly an initial response is returned. As in all these things, of course, good faith and willing is required on all sides. Newsquest takes its responsibilities under the PCC Code of Practice very seriously. The local managing director is looking into why we appear to have fallen down on this particular occasion. One question will be whether the delay was connected with the need to communicate with the agency.”

He added:  “We were somewhat surprised that a US-based ‘media ethics’ observer might be at all interested in a complaint to the UK media industry’s self-regulatory authority about the interpretation of a minor story supplied by a third-party agency and published in a small local newspaper in England.  There was certainly nothing particularly  striking about the complaint itself.  As you will have noted, the actual question was about whether or not the story carried an implicit suggestion that this officer’s voluntary decision to leave the force was connected to her alleged pursuit of a modelling career. The PCC has accepted the complainant’s insistence that there was a spare-time hobby but no ambition for a  ‘career’,  and the story was over-written in this regard.”