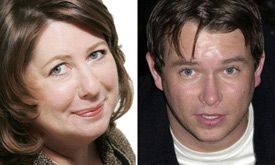 Last Friday, columnist Jan Moir, who writes for the UK edition of the Daily Mail, penned an obit-of-sorts about the death of former Boyzone (an Irish boy band) member Stephen Gately.

In the column, Moir made statements about Gately’s sexual orientation — he has been openly gay since 1999 — that riled readers to action. A lot of action. The UK’s Press Complaints Commission, the regulatory body which investigates complaints made about editorial content in the press, had received about 25,000 complaints about Moir’s story as of midday Tuesday, October 20, more than the total number of complaints the PCC received over the past five years combined. Although members of Gately’s family have not yet filed a complaint and the PCC’s press release states that the organization “generally requires the involvement of directly-affected parties in its investigations,” because of the sheer number of public complaints, the PCC will pursue the Daily Mail for a response.

Titled “A strange, lonely and troubling death…” (the original online title was “Why there was nothing ‘natural’ about Stephen Gately’s death“), Moir’s column is heavy on speculative and inflammatory comments. After introducing the idea that celebrity lives are “shadowed by dark appetites or fractured by private vice,” she racks up a list of potential fallen stars whose deaths wouldn’t surprise us because of the nature of their lifestyles. “Robbie, Amy, Kate, Whitney, Britney; we all know who they are. And we are not being ghoulish to anticipate, or to be mentally braced for, their bad end: a long night, a mysterious stranger, an odd set of circumstances that herald a sudden death,” Moir writes.

A reader can see that she’s trying to set-up an alternative and factually unsupported storyline for Gately, who was 33 years old when he died suddenly on October 10, 2009 while on vacation in Majorca. A postmortem found that Gately died of natural causes after suffering a pulmonary oedema, in which the lungs fill with fluid. Although his partner, Andrew Cowles, told authorities that he smoked cannabis the night he died, they don’t believe it played a part in his death. Neither does his family, who doesn’t suspect foul play of any kind.

But that doesn’t dampen Moir’s doubts. “But, hang on a minute. Something is terribly wrong with the way this incident has been shaped and spun into nothing more than an unfortunate mishap on a holiday weekend, like a broken teacup in the rented cottage….And I think if we are going to be honest, we would have to admit that the circumstances surrounding his death are more than a little sleazy.”

She then goes on to describe how she imagines Gately’s last evening with Cowles (the couple received a civil union in 2006).

“After a night of clubbing, Cowles and Gately took a young Bulgarian man back to their apartment. It is not disrespectful to assume that a game of canasta with 25-year-old Georgi Dochev was not what was on the cards

“Cowles and Dochev went to the bedroom together while Stephen remained alone in the living room.

“What happened before they parted is known only to the two men still alive. What happened afterwards is anyone’s guess.”

Her description is loosely based on facts — it is true that Cowles and Gately brought Dochev back to their home. But the rest, as far as anyone knows, is pure fantasy. And one with an agenda at that. Moir continues:

“Another real sadness about Gately’s death is that it strikes another blow to the happy-ever-after myth of civil partnerships.

“Gay activists are always calling for tolerance and understanding about same-sex relationships, arguing that they are just the same as heterosexual marriages. Not everyone, they say, is like George Michael.

“Of course, in many cases this may be true. Yet the recent death of Kevin McGee, the former husband of Little Britain star Matt Lucas, and now the dubious events of Gately’s last night raise troubling questions about what happened.” (Links in quotes all original to Daily Mail online.)

These last paragraphs seem to be the sentiments that have sparked the most outrage, but Guardian columnist Charlie Brooker finds the entire Moir diatribe offensive. “It has been 20 minutes since I’ve read her now-notorious column, and I’m still struggling to absorb the sheer scope of its hateful idiocy. It’s like gazing through a horrid little window into an awesome universe of pure blockheaded spite. Spiralling galaxies of ignorance roll majestically against a backdrop of what looks like dark prejudice, dotted hither and thither with winking stars of snide innuendo.”

Regarding Moir’s comments about the “myth of civil partnerships” and her mention of Kevin McGee, Brooker writes, “Way to spread the pain around, Jan. Way to link two unrelated tragedies, Jan. Way to gay-bash, Jan.”

On Friday, after the brouhaha erupted (but before the full magnitude of it was known), the Daily Mail released a statement from Moir that was published in the Guardian. In it, she defends herself explaining, “…the point of my column-which, I wonder how many of the people complaining have fully read – was to suggest that, in my honest opinion, his death raises many unanswered questions. That was all. Yes, anyone can die at anytime of anything. However, it seems unlikely to me that what took place in the hours immediately preceding Gately’s death – out all evening at a nightclub, taking illegal substances,  bringing a stranger back to the flat, getting intimate with that stranger – did not have a bearing  on his death. At  the very least, it could have exacerbated an underlying medical condition.”

She specifically addresses accusations that her column was homophobic. “In writing that ‘it strikes another blow to the happy-ever-after myth of civil partnerships’ I was suggesting that civil partnerships – the introduction of which I am on the record in supporting – have proved just to be as problematic as marriages.”

The Irish Daily Mail, which carries content from the UK version but did not run Moir’s column, included a disclaimer over the weekend along with their coverage on native Irishman Gately’s funeral. A clear attempt to distance the publication from Moir, the disclaimer read, “Comments made by journalist Jan Moir about Stephen Gately in her newspaper column caused controversy on Friday. Jan Moir’s column has never been published in the Irish Daily Mail which, like the Irish Mail on Sunday, is edited and printed entirely in Ireland – independent of the UK titles – and does not have an online presence.” (Link in quotes original to Guardian story.)

The PCC will be looking to see if Moir’s column violates their Code of Practice, which provides ethical guidelines for editors and publishers. At the end of his column, Brooker urges readers to “lodge a complaint about Moir’s article on the basis that it breaches sections 1, 5 and 12 of its code of practice.” Those sections deal with Accuracy, Intrusion into grief or shock, and Discrimination respectively.

We will continue to provide updates as the PCC progresses with its investigation.