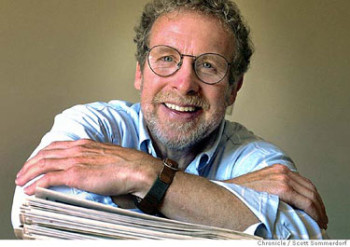 The 2009 book Detecting Bull by journalist and author John McManus advocates that the public have a “BS meter” in order to separate the good news from the bad and “avoid being misled.”

No, not that BS.  In Detecting Bull, BS refers to “bald sophistry”.  As defined by McManus, “BS is a plausible falsehood or perhaps a carefully selected part of a larger story presented as whole truth. The motive is usually to advance the self-interest of the messenger without revealing it.” (Page 32)

The book, by John McManus, won the Society of Professional Journalists’ Sigma Delta Chi 2009 research award.  McManus is a former journalist and journalism professor. He also founded Grade the News, a “media research project focusing on the quality of the news media in the San Francisco Bay Area.”  Grade the News is still a live website, but isn’t actively updated.

Written in an teacherly manner, Detecting Bull seems to target high school or college journalism courses.  Each of the nine chapters ends with exercises and discussion topics.  However, the numerous case studies throughout the book may be useful as context and background in media ethics issues such as the separation, “firewall,” between advertising and editorial.

The book, published by the Unvarnished Press, comes in two formats: traditional hardcover and an online version.  While the text is the same, the online version has a few perks:  First, it’s in color, whereas the hardcover edition is in black and white.  And, the online version is interactive – you can click on links and  citations for more information or go to the original source material.  Videos are incorporated into the text, as well.

You can buy the online book, or rent the book or just a chapter for a period of 20 weeks. In order to use the online book, you need to download a free media player called Haihaisoft Universal Player.

iMediaEthics: Who is the target audience for the book?

John McManus: The book is aimed at high school and college students, but others interested in detecting bias and evaluating the quality of news and current affairs information might find it useful.

iMediaEthics: What motivated you to write and research it?

John McManus: Two primary motivations: First, I wanted to share what I learned in seven years of running Grade the News.

Second, I want to be part of a civic revival. I believe that an informed public is a necessary (though insufficient) condition for democracy. But it’s becoming increasingly difficult to find trustworthy news in the daily tidal wave of information washing over us on cable TV and the Web. Traditional news media, especially newspapers, but also local and network TV, have laid off so many journalists that they are cutting corners, becoming more sensational and less substantive. They are also reducing international, state house and city hall coverage. News media that used to compete now cooperate, or have been absorbed under one owner who now has the power to say what people in the community will know about.  New providers of news — mostly online — vary enormously from excellent to egregious. But even the best are under-staffed and underfunded.  Others only pretend to do news. Their real purpose is advertising, public relations or advocacy. On the Web, almost anything goes. We are losing the signal in the noise.

Brooke Gladstone of NPR call this the “buyer beware” era of news. People can no longer rely on well-staffed newsrooms to separate what’s reliable from the rest. This book is designed to help people build their own internal BS meters. I also want citizens to be able to hold those who report the news — whether amateur or professional — to account.  The measures of bias and quality in the book are derived from the codes of ethics of the profession. Critiques of practice based on them should resonate in any kind of newsroom.

iMediaEthics:  In your opinion, what are the most important take-aways from the book?

John McManus: The most important is probably a practical set of questions people can use to vet news and information in order to avoid being fooled. Of course, I also hope people will use the book to examine their own prejudices and open their minds.

iMediaEthics:  What’s next in the works for you and your projects? Any plans to re-activate Grade the News?

John McManus:  I’m currently writing a new book. It will be aimed at a general, rather than academic, audience and written as a guide not just to news, but to other kinds of information that purport to be factual.

Grade the News is more needed than ever, but there’s little prospect for adequate funding to resume operations. It will remain lit, however, as a resource — an archive that might help others think about how to do news analysis. Also, a number of high school and college courses use the downloadable news scorecards.

Detecting Bull highlighted some negatives of the new models of journalism and journalists.  For example,

Detecting Bull is heavy on case studies. For example, in Chapter Five, McManus focuses on “institutional influence” on reporting.  According to McManus, “regardless of approach, the institution, not the journalist, exercises the greatest authority over news.” (93).

The book argues that “the most common type of advertiser influence” is beat reporting.  “Editors choose story topics and assign ‘beats’ not based on citizens’ information needs but in order to attract the audience advertisers hope to reach with their messages.”  As an example, McManus featured a case study of the San Francisco Examiner, which featured a July 22, 2005 column by realtor Bryan Jacobs recommending readers “hire a realtor.”

Another example is sections of reporting focused on wine, automobiles, and homes, which McManus wrote “though written by journalists, the purpose is to satisfy advertisers rather than the public.” (109)

“To be useful to society, news must be biased.”

“In a truly objective account of a day’s events, the story of each grass blade’s growth — or its being cut down in the prime of his life by a lawn mower — would be as important as a president’s assassination or the launch of a war.” (131)

See iMediaEthics’ other stories in our series on books and authors on media ethics here.