In an Iranian Image, a Missile Too Many

“In an Iranian Image, a Missile Too Many” 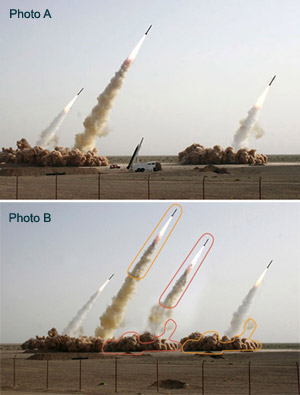 Photo A: "In the four-missile version of the image released Wednesday by Sepah News, the media arm of Iran's Revolutionary Guard, two major sections (encircled in red) appear to closely replicate other sections (encircled in orange). (Illustration by The New York Times; photo via Agence France-Presse) "
PhotoB: Whoops! "Another image that The Associated Press received from the same source on Thursday, which appeared to be taken from the same vantage point at almost the same time" is missing a rocket and launcher.

“As the above illustration shows, the second missile from the right appears to be the sum of two other missiles in the image. The contours of the billowing smoke match perfectly near the ground, as well in the immediate wake of the missile. Only a small black dot in the reddish area of exhaust seems to differ from the missile to its left, though there are also some slight variations in the color of the smoke and the sky. Does Iran’s state media use Photoshop? The charge has been leveled before…”

“In an Iranian Image, a Missile Too Many”