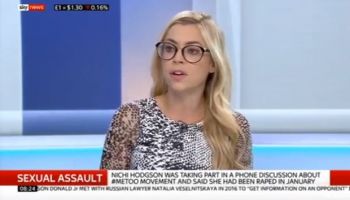 UK radio host James Whale “completely lacked sensitivity” when interviewing journalist Nichi Hodgson, who said she was sexually assaulted, his radio station admitted. As such, he has been suspended from his gig at talkRadio.

In an Aug. 3 statement, talkRadio said Whale’s interview “did not reflect the values of the station and completely lacked sensitivity when [Hodgson] discussed her personal story.”

“This style of broadcasting is not something that talkRADIO supports or encourages, and we have taken the decision to suspend James Whale pending a full investigation,” the station said. “This incident saw regrettable errors made by both the production and presenting teams and we are taking measures to ensure that they are not repeated again.”

In the interview, Whale laughed and questioned Hodgson’s account, suggesting she didn’t do enough after the attack and asking, “Are you not concerned that unless you went further with this, then this brute could actually do it to other women?”

Hodgson wrote in an article for The Guardian about her experience and reaction to Whale’s interview.”What began as a typically strident exchange between me and a journalist known for his belligerent presenting style became a merciless exercise in how not to interview someone who has experienced a sexual assault,” she wrote.

“Using every sneeringly dismissive and misogynistic trick in the book, he made the matter of my sexual assault an interrogation of my behaviour,” Hodgson continued. “When I attempted to cite my journalistic credentials as proof of being perfectly placed to talk with authority about both dating practices, and the matter of my own assault, he said: “It doesn’t matter what you are, you’re speaking as a woman.”

Hodgson added that she attempted to formally complain the day after the interview. In an e-mail to iMediaEthics, Hodgson said, “I’m not able to say too much more at the moment but I can tell you that no, no one from Talkradio nor James have offered an apology.” She also pointed to her interview with Sky News, in which she said Whale’s interview was “traumatizing.”

iMediaEthics has written to talkRADIO and Whale.

“In 2008, Whale was fired from sister station Talksport after encouraging listeners to vote for Boris Johnson in the London mayoral race,” Press Gazette reported, noting Ofcom fined the station for Whale’s comments.