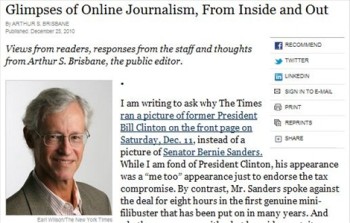 One reader, Ben Carlisle, noted that Times columnist William Rhoden’s Dec. 6 column on National Football League teams the New York Jets and New England Patriots — initially published before the teams played each other — was revised following the game to be “a new, watered-down version that was significantly different.”

Carlisle wondered if the Times permitted rewrites of columns “just because events have proved their opinions to be wrong-headed.”  In response, sports editor Tom Jolly accepted the blame for the incident. Jolly explained that “columnists and feature reporters occasionally write before a big game at night with the idea that it gives them a starting point to update when the game ends, which is often right on deadline, and it gives a presence on the game in the early editions of the paper online.”  Jolly noted that Rhoden’s column was much read on the Times’ website.

Brisbane commented as well, commending Jolly for “falling on his sword on this one.”

iMediaEthics notes that there is a correction appended to the column; however, it doesn’t mention or discuss the apparent revisions to the column.