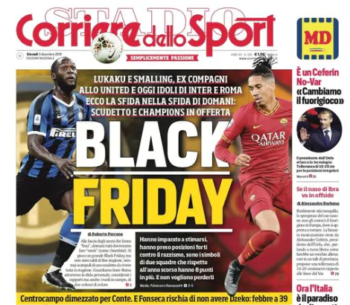 The article argued of the match between Inter and Roma teams: “In the faces of those idiots who boo, tomorrow everyone must instead go ‘oooh’ like children. It will be a Black Friday, but this is not an end-of-season sale.” The article also called the two athletes “two giants of colour,” according to Sky Sports.

For the Win, a publication of USA Today, commented, “It’s hard to tell if this is one of the stupidest attempts at tone deaf humor you’ll ever see in sporting journalism, or an antagonistic, trolling act of defiance from people in Italian football.”

Corriere editor Ivan Zazzaroni defended the headline in a statement on its website as “innocent” and “praising diversity,” claiming anyone who thought otherwise can’t praise diversity, according to the Daily Mail. According to a Google translate of the statement from Zazzaroni, the paper also criticized “armies of right-minded people” who judge and move on.

For context, the Daily Mail noted there have been racist issues in Italian soccer lately:

“Italian football has been battling against a number of racist incidents aimed at players this season with Lukaku met with monkey noises as he went to take a penalty in a win away at Cagliari earlier this season.

“Mario Balotelli has also been targeted and he reacted furiously away at Hellas Verona when he heard abuse aimed at him, almost threatening to walk off the pitch.”

Lukaku’s agent Federico Pastroello told Sky Sports News he was “really ashamed to read a title like that.”

Smalling and Lukaku tweeted about the headline, CNN noted.

Smalling wrote the headline was “wrong and highly insensitive” and called on editors to “Take responsibility and understand the power they possess through words, and the impact those words can have.”

Lukaku called it “the most dumbest of headlines I have ever seen in my career” and called for the newspaper to be educated.

iMediaEthics has written to both players’ agents and the newspaper.