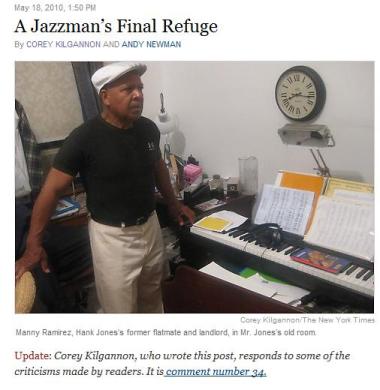 This detail from a New York Times City Room blog screen shot shows not only the picture which reporter Corey Kilgannon took of Hank Jones' apartment within 24 hours of his death, but also that Kilgannon had to address some of the negative comments from readers about his reporting inside Jones's apartment. (Credit: NYT)

Is it ethical for a reporter to go in a recently deceased man’s apartment and then write a blog entry about it?

New York Times City Room blogger Corey Kilgannon didn’t see anything wrong with it when he did just that in mid-May.  Hank Jones died May 16, and The New York Times published an obituary of the jazz musician on May 17.  Then, Kilgannon went into Jones’ apartment with Jones’ roommate and landlord Manny Ramirez.  In his“A Jazzman’s Final Refuge” blogpost for the City Room, which was published May 18, Kilgannon claims Ramirez broke into the apartment to clean it.

Kilgannon details what the apartment looks like and what’s in it.

Reaction to Kilgannon’s blog was largely negative.  While about a third of the 68 comments on the blog, as of May 25, either didn’t comment on Kilgannon’s entry into the apartment or defended the blog, the remaining two-thirds disagreed with the reporter’s entry into Jones’s apartment, calling it misleading, an invasion of privacy, and illegal.

Jones’s friends’ and family’s comments defended Jones’s memory and voiced their complaints with what they called an invasion of privacy.

Kilgannon wrote May 19 a response to the criticism in the comments:

“In no way did I intend to shine an unflattering light on the memory of Hank Jones. I simply wanted to augment our obituary of him, with an account of his offstage life in his final years.

“I live across the street from the building, and upon hearing of Mr. Jones’ death, I called Manny Ramirez, who said he had spoken to Mr. Jones’ relatives and to a lawyer, and was ready to pack up Mr. Jones’ belongings and put them in storage for the Jones estate.

“I found it touching that Mr. Jones chose such an isolated life, towards the end, and I probably could have been better at describing that it seemed by-choice, out of passion for his art, not out of depression or some sense of shame.

“This was not intended to define Mr. Jones and his legacy by the condition of his room, but rather to attempt to glimpse him as a human, to add to the official and public image we already have of him. If he lived in a mansion, I would have been just as eager to visit and write about that.”

However, Jones’ family wrote May 20 in Kilgannon blog’s comments section that Ramirez “NEVER contacted a family member prior to speaking with the New York Times or prior to breaking into Uncle Hank’s room.” Family members, Dr. Thedia Jones Smith and Bruce Thaddeus Jones, wrote that Ramirez disrespected Jones’ rights of privacy and rights as a tenant.

Was it in the public’s interest to go into the apartment of a recently deceased man, take photos and detail what the man had in his apartment without the family’s permission?  It may have been interesting to some, but many commenters, including Jones’ manager and producer, Jean-Pierre Leduc, thought it was unnecessary – and misleading.

Leduc wrote May 19 that he thought the original obituary was sufficient – and “excellent” – and agreed that the follow-up blog was an invasion of privacy.

“But perhaps it’s in keeping with our times to now have a TMZ or National Enquirer angle, and to not leave well enough alone,” Leduc wrote. “I know and respect Mr. Ramirez, and he was very good to Hank. I just don’t understand why the article was written and what is gained from its publication.”

One commenter, Danny Bloom, wrote that Kilgannon’s blogpost about Jones was “ill-thought out, ill-fated and wrong from the get go.”

Another commenter, Roberto Reveron, wrote that he was “deeply troubled” by Kilgannon’s entry, and called it “not just a callous invasion of privacy” but also “illegal.”

Some commenters, including “PS Michaels” wrote calling for a better and more complete apology from The New York Times and Kilgannon.  Michaels also called the blog “ghoulish tabloid fodder that belongs in the National Enquirer.”

The New York Times Picker, which devotes itself to picking apart The Times, wrote May 23 that the City Room blog suggests Jones’ life was “lonely and sad” and was “made even worse by the reporter’s brazen disregard for Jones’ privacy by snapping – and publishing – a photo from inside his room.” They conclude: “We don’t think much of NYT reporters looking over and photographing the private belongings of dead people in the first hours after their death — in a mansion or a hovel — without direct permission from a family member or lawyer. It just doesn’t feel right to us.”

Michael Leddy concluded May 23 on his blog, Orange Crate Art, that the “shoddy – and perhaps illegal – invasion of privacy has yielded a maudlin, uninformed piece of reportage.”

The Society of Professional Journalists’ code of ethics cites relevant points regarding the need for “journalists to minimize harm.”  Specifically:

UPDATE: 06/01/2010: 8:27 AM: The New York Times’s public editor, Clark Hoyt, wrote May 28 about Kilgannon’s blog post.  Hoyt wrote that Times‘ editors defended the post, but that the post has raised ethical question areas including privacy and blogging standards.