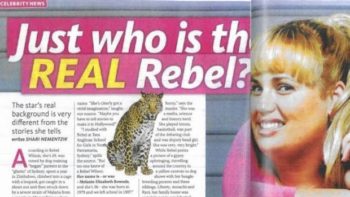 Rebel Wilson made headlines last year when she was awarded Australian’s largest defamation payout — about $3.6 million U.S. ($4.5 million Australian) —  after a judge ruled Bauer Media “orchestrated” a campaign against her. Wilson claimed that Bauer’s articles about her caused her to lose jobs.

Now, the Australian actress must pay back most of the money. “The Victorian Court of Appeal ruled that Wilson had failed to prove that Bauer was responsible for her missing out on film roles,” the BBC explained.

Bauer Media successfully appealed the damages ruling and Wilson has to pay Bauer Media about $3.07 million U.S. (or $4,183,071.45 Australian). She also must pay most of Bauer’s appeal costs, according to the Australian Associated Press.

The ruling is posted on the Supreme Court of Victoria – Court of Appeal website. iMediaEthics has contacted Wilson’s attorneys and Bauer Media.

As iMediaEthics previously reported, Wilson sued Bauer Media over eight 2015 stories claiming she lied about her background including her birth name and age. She won her lawsuit last summer, and in Sept. 2017, Australian judge Justice John Dixon ruled that Bauer pay Wilson $650,000 (Australian) in damages and $3.9 million (Australian).

“Only a substantial sum in damages could convince the public that Ms Wilson is not a dishonest person and bring home the gravity of the reputational injury established before the jury,” the Sept. 13 ruling states. “In the full media glare, Bauer Media’s defence of this case attempted to characterise its articles as true or as trivial or not likely to be taken seriously. Unless substantial damages are awarded there is a real risk that the public will not be convinced of the seriousness of the defamation, but will rather wrongly conclude that the articles were trivial or not that serious. The jury comprehensively rejected the defences and only a substantial damages award can now vindicate the plaintiff.”