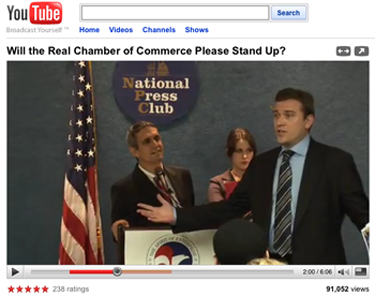 Reuters (and subsequently The New York Times and Washington Post) fell for a hoax press release issued by the farcical activists the Yes Men on Monday, October 19.

Greg Sargent writes in his blog that Reuters published the story, reporting that the U.S. Chamber of Commerce had reversed its opposition to climate change legislation, based on a hoax press release.  The Reuters story was then picked up by the New York Times and the Washington Post, among other outlets, but the Chamber of Commerce actually had nothing to do with the release, and denied issuing it or scheduling the press conference mentioned in the document.

The Chamber of Commerce has hitherto been opposed to climate legislation now in Congress, even suggesting that climate change be taken to court to prove itself in a modern-day version of the Scopes Monkey Trial, whch was seen as a test of the theory of evolution.

“The Reuters spokesperson confirmed to me that the news org had received the fraudulent press release around 9 AM saying that the Chamber had scheduled an 11 AM presser to ‘announce’ its ‘shift.’ The news org moved a story around the time of the presser,” Sargent writes.

In fact, the release was the work of the activist group The Yes Men and The Avaaz Action Factory (AAF,) according to reporting by Zachary Roth of Talking Points Memo (TPM).

Early Monday, TPM confirmed the hoax, speaking with J.P. Fielder, a Chamber spokesman, who said the Chamber of Commerce didn’t know who was behind the press release. Later, the website reported that Yes Man Andy Bichlbaum had “showed up at the 11am press conference… impersonating a Chamber executive.”

TPM spoke with an AAF organizer, David Sievers who said “The U.S. Chamber of Commerce is a parody of itself in running circles around its own position on climate… So Yes Men took the opportunity to parody them.”  (See a video of the hoax press conference here.)

The subject of the fraudulent release is such a sensitive one, that Reuters has admitted it could have actually influenced financial markets, Sargent says:

Reuters is now admitting that their epic screw-up today — it fell for a hoax press release and ran a story about the U.S. Chamber of Commerce supposedly changing its opposition to climate change legislation — could actually have moved financial markets, an acknowledgment of how serious the error really was.

“Reuters has an obligation to its clients to publish news and information that could move financial markets, and this story had the potential to do that,” Reuters spokesperson Courtney Dolan told me just now.

The bunk press release claimed that the Chamber of Commerce “is throwing its weight behind strong climate legislation.” And made other suspicious statements.  But Reuters was still fooled.

Dolan acknowledged that “it’s company policy” to call subjects before basing stories on “suspicious press releases.” She added: “The person viewing this press release for whatever reason didn’t view it as suspicious.” At least Reuters issued a correction immediately after confirming the hoax. Sargent quotes Reuters spokesperson Courtney Dolan explaining that “in keeping with Reuters policy, the story was subsequently withdrawn and an advisory sent to readers.”

The original Reuters report of the hoax release is preserved here.