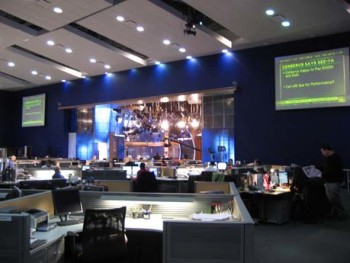 As NPR put it, the “media consensus is that CNBC was GOP Debate’s ‘biggest loser,” pointing to several outlets that called out CNBC’s moderation and questions.

“The cable financial network’s trio of moderators fumbled and stumbled, and positioned themselves — and the news media — as punching bags for the Republican contenders, who took full advantage,” Rieder wrote, adding “The questions were contentious and at times condescending. There was too much gotcha. And some of it was just plain weird.”

The moderators “repeatedly clashed with the candidates while asking questions. On several occasions, they seemed to lack the confidence to challenge false assertions. They asked some small-bore questions. And they regularly interrupted the candidates or talked over them in a way that seemed to rob them of control and contributed to a free-for-all atmosphere.”

Candidate Ted Cruz also slammed the CNBC moderators in a much-talked-about-moment during the debate, complaining:

“This is not a cage match. And if you look at the questions: Donald Trump, are you a comic book villain? Ben Carson, can you do math? John Kasich, will you insult two people over here? Marco Rubio, why don’t you resign? Jeb Bush, why have your numbers fallen? How about talking about the substantive issues … and, Carl, I’m not finished yet. The contrast with the Democratic debate, where every fawning question from the media was, Which of you is more handsome and why?….”

Priebus said CNBC “should be ashamed” and was both “improper and unprofessional.”

CNBC should be ashamed of how this debate was handled. #GOPDebate

I will fight to ensure future debates allow for a more robust exchange. #GOPDebate

In spite of the moderators, I'm proud of our team for standing up against the improper and unprofessional display put on by CNBC.

However, USA Today‘s Rieder pointed out that the criticism of CNBC affects all of the media, writing:

“There’s no doubt the CNBC brand took a serious hit Wednesday night. The network seemed way in over its head. But the media itself will suffer collateral damage.

“The off-target questions and the overly combative tone reinforce the notion that the press, particularly in Washington, is insular, self-important and out of touch.

“The upside would be if this fiasco serves as a wake-up call, and future debates focus on substance, not sideshows.”

Transcripts of the debate are on CNBC’s website here and here. Time noted that CNBC didn’t have a free live-stream available of the debate for people without cable.

iMediaEthics has written to CNBC to ask if it has any response to the criticism of its handling of the debate.