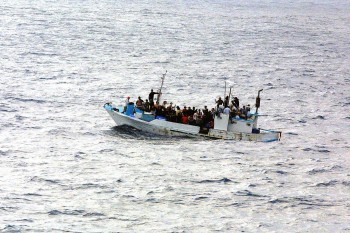 Graphic photos of the refugee crisis in the Mediterranean are all over the Internet, and also on the front pages of papers this morning.

Almost all of the UK national newspapers used photos of a dead Syrian child on their front pages. The boy has been identified as Aylan Kurdi.

iMediaEthics isn’t using the images of the dead child because we can describe the coverage without needing to show them. We are linking though to front pages and articles so our readers have the full option–to see the images or not.

Below, iMediaEthics has collected examples of how news outlets, especially in the UK, have used the photos and if they warned readers.

The Sun used two side-by-side photos, one of an infant “born in a Hungarian station yesterday” and one of a man holding a dead child who “died on a Turkish beach yesterday.”

The UK Independent used an almost full-page photo of a dead child lying face down on the beach as waves come in, identified as a “Syrian boy, drowned in his family’s attempt to reach Greece from Turkey.”

In an article, the Independent explained why it published the images:

“The Independent has taken the decision to publish these images because, among the often glib words about the “ongoing migrant crisis”, it is all too easy to forget the reality of the desperate situation facing many refugees.”

The Independent‘s front page showed what looks like an official looking down at the boy’s dead body, face down in the sand. (See here.)

The Guardian posted a warning atop its article noting it “contains images that readers may find distressing.”

The Guardian‘s front page shows a four column wide picture of a man carrying the dead child. The headline is “The shocking, cruel reality of Europe’s refugee crisis.” The child’s face is not shown.

The BBC used warnings in its story and video about the “distressing image.”

The UK Mirror blurred the dead child, but also posted a warning to readers. At the top of the story, in all caps, the Mirror wrote “WARNING: DISTRESSING IMAGES.” Its video report also includes a warning that reads: “Warning: Distressing Innocent Child Victims of Europe’s Migrant Crisis.”

The Mirror used a photo of the dead boy being carried on the beach but didn’t show his head. The headline in all caps read: “Unbearable.”

Likewise, the Daily Mail  and the Times of London used a large photo of the dead boy being carried but didn’t show his face.

Unlike the other UK national papers, the Telegraph didn’t use a photo of the dead boy, instead opting for a picture of a soldier carrying a crying child through a crowd.

The Canadian Broadcasting Corp. reported that it will publish the photos “sparingly” with warnings.  The CBC noted that the Globe and Mail didn’t warn readers before using the photo but the National Post did warn its readers.

Canadian Broadcasting Corp. questioned if the photos of the drowned child should be shared on social media, warning readers it used “2 graphic photographs of a child who died.”

CBC explained why it used the photos in an editor’s note:

“EDITOR’S NOTE (GRAPHIC WARNING): This story contains two graphic photographs of a young boy who died, images some viewers may find disturbing. They are embedded at the bottom of this story, after the last paragraph of text. CBC News has decided to include the photos to allow for the fullest understanding of the event, but we do want to give readers the option to not scroll down and click away if they don’t want to see them.”

Reuters posted a warning to readers atop a story that read: “WARNING: The following story contains disturbing images.”

According to CBC, the photo of the dead boy on the beach got a lot of online traction because of Human Rights Watch’s emergency director’s tweet, which showed the boy with the caption “Just pause 4 moment & imagine this was your child, drowned trying 2 flee #Syria war 4 safety of #EU. #solidarity.”  The HRW’s Peter Bouckaert’s tweet has been re-tweeted more than 1500 times.

Bouckaert blogged as well to explain why he shared the photo. “Some say the picture is too offensive to share online or print in our newspapers. But what I find offensive is that drowned children are washing up on our shorelines, when more could have been done to prevent their deaths,” Bouckaert wrote. “It was not an easy decision to share a brutal image of a drowned child. But I care about these children as much as my own. Maybe if Europe’s leaders did too, they would try to stem this ghastly spectacle. ”

Earlier this week, iMediaEthics posted “Migrant or Refugee? Which term is right?”