Migrant or Refugee? Which Term is Right? - iMediaEthics 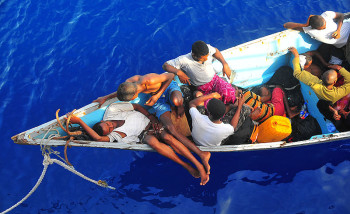 Migrant or refugee? Which term is right? NPR, Slate and Al Jazeera all discussed the two terms recently, with Al Jazeera announcing it won’t use the term “migrant” to refer to the crisis in the Mediterranean. And National Public Radio’s ombudsman discussed the network’s own guidance for the terms, including a fail-safe tip — describe what’s happening rather than labeling.

NPR has guidance over the terms migrant, immigrant, and refugee, the network’s ombudsman Elizabeth Jensen explained Aug. 21. She pointed to NPR standards editor Mark Memmott’s interview earlier this year over the terms.

“Refugees leave their homes or their countries to escape persecution, or they might be seeking safety because of wars, as you said,” Memmott said. “Some may have been forced from their homes by armed forces.”

As a general term for people moving from countries for any reason, migrants works as a catch-all, Memmott summarized. “Certainly, many of the people who we’ve been hearing or reading about are refugees, but they’ve been coming from more than a dozen countries, and they’ve been coming for many different reasons; some of them maybe just to seek better lives. The word migrants fits for them all,” according to Memmott.

Specifically, he referred to the dictionary definition of the term migrant: “As the dictionary says, a migrant is a person who moves from one place to another, and in particular, it’s a word applied to those who leave one country to settle in another.”

And what about immigration? Memmott said “We haven’t been using the word immigrants for a very sad reason. The people who didn’t make it to Europe – the hundreds who drowned – never got the chance to immigrate. One immigrates when you arrive in a new country.”

While highlighting that the descriptions are specific distinctions and citing other guidance, Jensen recommended NPR use “migrants” as “an umbrella term that also accurately reflects that these are people on the move.” The word “refugees” should be used if NPR can “determine that a group of people are largely homogenous” and refugees.

Slate’s Joshua Keating reminded that “the terms migrant and refugee have often been used interchangeably, but there is an important political and legal distinction between the two.” (One important point – “the word refugee has political power.”) He explained:

“According to the U.N. High Commissioner for Refugees, refugees ‘are persons fleeing armed conflict or persecution’ and seeking safety in other countries, while migrants ‘choose to move not because of a direct threat of persecution or death, but mainly to improve their lives by finding work, or in some cases for education, family reunion, or other reasons.’” Refugees, unlike migrants, are entitled to certain legal protections under the 1951 Refugee Convention—most crucially, that they cannot be returned to situations where their life or freedom would be threatened.”

“The umbrella term migrant is no longer fit for purpose when it comes to describing the horror unfolding in the Mediterranean,” Malone argued. “It has evolved from its dictionary definitions into a tool that dehumanises and distances, a blunt pejorative.”

He furthered that argument: “It already feels like we are putting a value on the word. Migrant deaths are not worth as much to the media as the deaths of others – which means that their lives are not. Drowning disasters drop further and further down news bulletins. We rarely talk about the dead as individuals anymore. They are numbers.”

Malone went on, “Migrant is a word that strips suffering people of voice. Substituting refugee for it is – in the smallest way – an attempt to give some back.”