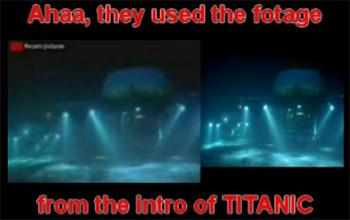 Russia Today claimed it had footage from a "trial run" of the expedition...What they really showed, however, was footage of the blockbuster hit Titanic. Image shown is a frame captured from You Tube user Densloe's video response.

“I’ll never let go. I promise. I’ll never let go.” Recognize these lines? If you were around in the late 90s, you probably know they come from the blockbuster hit Titanic, starring Kate Winslet and Leonardo DiCaprio. The movie is about the fateful voyage of the Titanic. It is not about a Russian exploration of the Arctic Ocean.

So why, You Tube user Densloe asks, did scenes from the film appear on the Russian Today’s August 2007 report on a Russian expedition to explore the floor of the Arctic Ocean?

The Russia Today reports says they are “on-board a mini submarine, ready to descend through two miles of Arctic Ocean down to the sea bed, then plant this metal flag, putting Russia’s claim robustly on the map…These pictures were filmed during a trial run.” Trail run?!  They should have said Hollywood set!  In a video response to the bogus report, Densloe uses a freeze frame to show that the “footage” of the expedition is actually pulled directly from the introduction to Titanic. I guess editors thought the fake video depiction of Russian technology looks better than the real thing (er, if it even exists)?

Since Russia Today gives no disclosure and furthermore, claims it is truly footage of the expedition, this is a clear copyright violation as well as deception foisted upon the public. Kudos to Densloe for exposing the fraudulent video footage.