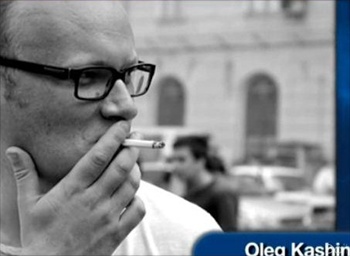 Russian journalist Oleg Kashin, pictured above in a screenshot from a Daily Motion video, was recently attacked. (Credit: "Daily Motion")

In the past week, three Russian reporters were attacked and another – who was severely attacked in 2008 – lost a defamation lawsuit.

The attacks have been condemned by journalists’ organizations and governments and journalists “rallied” yesterday in Moscow in reaction to the attacks, wire service AFP reported.

Russia is ranked 140 of 178 countries on Reporters without Borders’ 2010 press freedom list.

While he wasn’t robbed, “several fingers were broken and at least one part of a finger had been torn off” during the beating, the Los Angeles Times reported.

“What’s so utterly disgusting about the case is that the attackers did their utmost if not to kill Kashin but to maim him gravely enough to prevent him from ever being physically able to write again,” Russian Union of Journalist’s Secretary Mikhail Fedetov said about the attack, according to the LA Times.

Kashin had been threatened before for his work.  Global Voices Online reported that he “clashed” with political figure Andrei Turchak in August.  Following his criticism of the Pskov governor, Kashin reportedly was threatened.  Kashin was also listed in “pro-Kremlin youth movement” Molodaya Gvardia’s journalist-traitor’s “black list” with a note that he “will be punished.”

Another reporter was beaten just days later.  Anatoly Adamchuk was beaten Nov. 8, Reuters reported.  Adamchuk, of Zhukovskie vesti, “suffered a concussion” and other minor injuries.  However, he has been accused of faking his attack by Russia’s interior ministry.

Reporters without Borders reported that Sergei Mikhailov of Saratovsky Reporters was also attacked.  The Nov. 5 attack didn’t “badly hurt” the editor though.  According to the Guardian, Mikhailov had received a threatening text message from an MP after criticizing the political figure.

The Associated Press reported that Russian reporter Mikhail Beketov, who was “left handicapped by a 2008 beating,” was convicted of slander Nov. 10. He was a reporter for Moscow newspaper Khimkinskaya Pravda, according to the Telegraph.

Reporters without Borders issued a statement saying that the nonprofit organization “condemns this judicial harassment of a journalist.”

Beketov was sued for defamation by Khimki mayor Vladimir Strelchenko after Beketov accused the mayor of being responsible for blowing up the journalist’s car in 2007, the New Scotsman reported.

Beketov’s reporting on “corruption and the destruction” of a Moscow-area forest led to the attack which disabled him, news reports indicate.

The beating put Beketov in a wheelchair. He also cannot speak, the AP added. As the Telegraph reported, no one “has been arrested in connection” with the attack.

Meanwhile, the New York Times reported Nov. 11 that “law enforcement authorities … unexpectedly reopened the investigation” into his beating, which also left him with “three fingers and a leg amputated.”

StinkyJournalism is writing to Reporters without Borders and will update with any response.