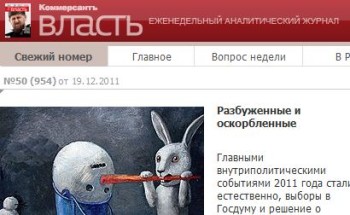 Russian magazine editor Maxim Kovalsky was fired eariler this month because the magazine, Kommersant Vlast, “published a picture of a ballot paper from last week’s parliamentary vote with the words ‘Putin, go f— yourself’  scrawled in red ink,” according to the Guardian. The photo had the caption: “A correctly filled out ballot recognised as invalid.”

The publisher’s general director, Demyan Kudryavtsev, resigned because of the incident, according to the Guardian.  Kudryavtsev said his resignation was because “internal procedures and rules” weren’t followed.