Russian Minister of Communications: 'Journalism doesn't have any mission, j

Russian Minister of Communications: ‘Journalism doesn’t have any mission, journalism is a business’ 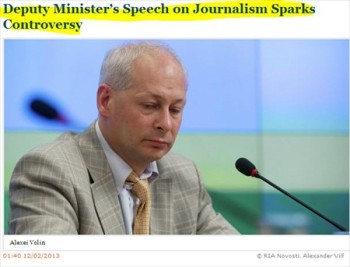 Ethics in journalism took another blow in Russia last month when the country’s Deputy Minister of Communications and Mass Media, Alexei Volin, told journalism students and lecturers that reporting wasn’t a “mission” but a “business” and that they should do what their paymasters told them.

“Today’s journalists must be taught to listen to the uncle who pays the money.

“Journalism doesn’t have any mission, journalism is a business.

“Journalists should always keep in mind that their task is not to make the world better or lead humanity along the right path.

“The task of a journalist is to make money for those who hired him, and this can only be done if you become interesting to listeners and readers.

“Young journalists should know that they will write the things that their owner, that is their master, will tell them to write.”

And in a message seemingly directed straight at the university’s lecturers he warned:

“If you don’t teach this – you are committing a crime.”

When one of the audience members asked what he thought the reaction to his speech would be, Volin replied: “I don’t care about your reaction.”

One member of the audience iMediaEthics tracked down who called herself Natalya but asked for her surname not to be printed for fear of possible problems later told iMediaEthics: “This was outrageous to hear.”

“Journalists over here are being killed in their efforts to get the truth out and this man tells us we should just write propaganda and that if we don’t we’re committing a crime.  It makes your stomach turn.

“The job of journalists is to hold people like him to account, not kowtow to him,” she said.

Journalist Svetlana Raspopova, who was covering the lecture according to the news site Lenta.ru, said the speech hadn’t gone down well and that the audience members were stamping their feet and clapping their hands together in derision.

Following his lecture, the deputy minister gave an exclusive interview to local newspaper Izvestia under the headline “Deputy Minister of Communications – modern journalists and media business” in which he was asked to clarify his statements.

When asked by the newspaper how long he had believed journalism was business and not a mission he replied:

“All my experience in journalism leads me to the understanding that journalism is a business.

“It also says that the truly independent media is the commercially successful media.

“The one who pays, he always orders the tune.”

The minister was then asked by Izvestia what he was going to do to make journalism students understand that journalism was business to which he said “discussions” had already started “with the Ministry of Education and a number of universities about the standards of education.”

“It’s clear that changes are needed.  And it’s clear that any changes meet resistance.  But if we want to have the professional personnel needed by the media industry, we will have to make these changes,” he told the paper.

He ended the interview by saying he didn’t regret what he had said and that addressing the lecturers at the university had been the right choice because:

“These are the people who influence the students and form their ideas about the life outside the academy. If this life is hard, then one needs to talk about it honestly.  For too long they have been silent or talked about something else.”

Journalists from five different news outlets in Moscow that iMediaEthics spoke to now fear the Kremlin is clamping down on the future of Russia’s free press.  One journalist working in Moscow, who asked for his identity to remain secret for fear of reprisals, told iMediaEthics over the phone that he wasn’t surprised by what Volin had said.

“In the West you don’t really know what it’s like here.  Sure, you have journalists being arrested in the UK at the moment, but that’s because they are suspected of committing a crime.

“Over here you can be arrested or shot for reporting the wrong thing.

“And over here, as I say, that sort of thing can get you killed.

“Just look at what happened to Anna Politkovskaya.

“For a long time the government here has been clamping down on free expression of the media, this latest thing doesn’t surprise me in the slightest.

“Get at the future generation of journalist early.”

Pravda newspaper interviewed the former editor of the newspaper Vladimir Gubarev who said: “Such people should not be allowed close to any public office, or anything at all, for this matter.

“Forgive me, but this official is either an idiot or a scoundrel. Only a person who understands nothing but money can say something like this.”

The newspaper also interviewed a former correspondent for Pravda in Afghanistan, Vadim Okulov, who said: “I have never in my journalistic practice received any direct instructions and never heard any of my colleagues complaining about something similar to what this wonderful deputy expressed to our current colleagues.

“They are rude in form and cynical in content.”

Russian Minister of Communications: ‘Journalism doesn’t have any mission, journalism is a business’