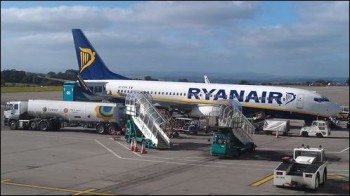 In question was the Independent‘s claim Ryanair “restricted the amount of fuel [their aircraft carry] to the legal minimum.” The article also made claims about how much fuel Ryanair carried in 2010 — specifically, that Ryanair didn’t have enough fuel legally required to land. Citing a Spanish Civil Aviation Accident and Incident Investigation Commission safety report, the Independent article stated:

“Airlines such as Ryanair could be putting passengers at risk by restricting the amount of fuel they carry in an attempt to cut costs, aviation authorities have warned.”

The Independent noted that the report was “disowned by Ryanair management.”

This week, Ryanair published press statements announcing the settlement on its website.  A press statement from the airline’s solicitor, Paul Tweed, defended Ryanair’s “29 year safety record and their safety standards,” and noted that the airline is still suing UK Channel 4 for its report on the airline. Tweed said, in part:

“Ryanair appreciates the Independent’s detailed and comprehensive statement setting the record straight before the High Court this morning, in conjunction with the apology published by the newspaper on an earlier date.”

The Ryanair press release included a statement from Ryanair’s director of flight & ground operations, David O’Brien, saying the airline “cannot and will not tolerate totally unjustified and inappropriate allegations in relation to our industry leading safety.”

On Aug. 9, the Independent published an apology and correction about its article.The correction stated:

“In Wednesday’s article “Low-fuel flights put lives at risk”, we reported that Ryanair  ‘restricted the amount of fuel [their aircraft carry] to the legal minimum’.  In fact, their pilots are permitted to carry 300kg over the minimum requirement and more in some circumstances.  Our report referred to a legal minimum fuel-reserve which aircraft must have on board: we should have made clear this is on departure and Ryanair complied with this take-off requirement. Ryanair disputes the report of the Spanish Civil Aviation Accident and Incident Investigation Commission into an incident in which one of its aircraft made an emergency landing with a portion of this fuel-reserve used by the time it touched down. We apologise for this confusion.”

Ryanair got yet another libel settlement from a newspaper recently. As iMediaEthics wrote, the Daily Mail gave an undisclosed settlement and apology for its Aug. 11 story, “Ryanair pilots ‘bullied into silence over safety’: Two-thirds say they are not comfortable raising fears with their bosses.”

The airline is still suing the UK’s Channel 4 for its August report that covered that survey as well as “concerns over the budget carrier’s fuel policy and pilot working conditions.”

iMediaEthics has written to Ryanair’s solicitor Paul Tweed for  further comment and will update with any response.