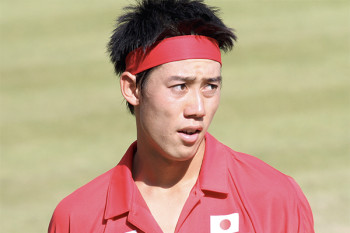 ESPN host Chris Fowler was duped by a fake website, MediaMass, because he failed to check his facts.

Fowler reported a series of wrong facts about Japanese tennis star Kei Nishikori, including that he is the world’s highest-paid tennis star and has his own vodka line, soccer team and restaurant chain, USA Today reported. In the segment:

“You’re looking at the highest paid tennis player in the male side in the world. That might be a surprise to Roger Federer fans, but Nishikori has signed up lots of companies. According to published reports, made about 46 million last year…How’s he doing it? He owns Fat Nishikori burger restaurant, a football team which is soccer, his own brand of vodka, he’s got a perfume, he’s got a clothing line…He’s got a whole lot of deals with Japanese companies.”

Despite Fowler’s claim, Deadspin reported, citing Forbes magazine, that Nishikori didn’t make $46 million last year but just $11 million, which “makes him the ninth-highest paid player — not the richest.” Forbes breaks that down as $9 million in endorsements and $2 million in prize money.

The satire site, Media Mass, had reported that Nishikori was the top paid player making $46 million, based on the (fictional) People with Money magazine.

“He owes his fortune to smart stock investments, substantial property holdings, lucrative endorsement deals with CoverGirl cosmetics. He also owns several restaurants (the “Fat Nishikori Burger” chain) in Tokyo, a Football Team (the “Matsue Angels”), has launched his own brand of Vodka (Pure Wondernishikori – Japan), and is tackling the juniors market with a top-selling perfume (With Love from Kei) and a fashion line called “Kei Nishikori Seduction,'” Media Mass reported.

Within the article, however, in red letters, was a note saying the story was false, linking to a 2012 page describing Media Mass’s project. The update, which iMediaEthics highlighted below, says it was posted Jan. 25, 2015, but it was posted when iMediaEthics viewed the story Jan. 24, so we are unsure when it was published.

That update linked to a page on Media Mass’ website. “The website mediamass.net is the medium of our satire to expose with humour, exaggeration and ridicule the contemporary mass production and mass consumption that we observe,” Media Mass’ website states.

In ESPN’s defense,  USA Today noted, “None of the information was completely absurd — it’s not as if they said he owned four castles or slept upside down in a hyperbaric chamber or plans on being one of those people who want to take a one-way trip to Mars.”

Fowler apologized for the error on Twitter, Sports Grid noted.

Oops. Told I’m not the first to be fooled by “satirical” article on #Nishikori‘s endorsements! No burgers. No vodka. No perfume. Not yet.

So apparently not EVERYTHING fed to you by a Google search is 100% truthful. having a laugh at my own expense is healthy.
— Chris Fowler (@cbfowler) January 20, 2015