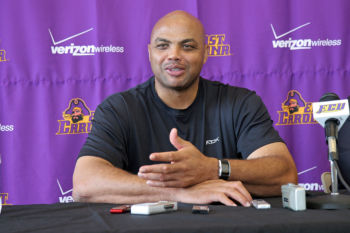 Charles Barkley, the former NBA player and current TNT NBA analyst, told a reporter from Axios, Alexi McCammond, that “I don’t hit women but if I did I would hit you,” McCammond tweeted.

According to McCammond, Barkley had said he was pro-Deval Patrick, and then said to a Pete Buttigieg campaign staffer he liked Buttigieg. McCammond wrote that she reminded him of his Patrick comment and then he made the hitting women remark.

The New York Times noted, “Barkley has a history of making threatening and demeaning comments to and about women then apologizing and saying he was joking.”

Now, Barkley has apologized for his “inappropriate and unacceptable” remark.

“My comment was inappropriate and unacceptable. It was an attempted joke that wasn’t funny at all. There’s no excuse for it and I apologize,” Barkley said in a statement according to USA Today.

McCammond responded to his apology tweeting, “The comments Charles Barkley made to me are not acceptable. Threats of violence are not a joke, & no person deserves to be hit or threatened like that. Silence only allows the culture of misogyny to fester. And those kinds of comments don’t merit off-the-record protections.”

She also noted that she deleted “some past insensitive tweets” that were flagged.

Despite the apology, McCammond has received numerous threats online, she tweeted.

iMediaEthics has written to McCammond and TNT.