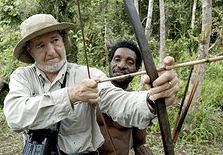 Jared Diamond is shown here in a still from a National Geographic series, based upon his best-selling book, Guns Germs and Steel. Diamond wrote an "Annals of Anthropology" essay in the New Yorker last year that accuses Papua New Guinea tribesmen, Henep Isum of being a Ombal tribal leader who organized revenge killing from 1992-1995 in Papua New Guinea. The problem was none of this was true. He wasn't even an Ombal and he served his community as a village peace officer during 1992-1995. New Yorkers famed fact checkers provide no evidence of ever attempting to contact Mr. Mandingo before publication. Now he is suing in pursuit of an apology and retraction of what he calls "lies." Now the courts will decide.

Science magazine reporter Michael Balter scored a coup. The press has tried–and failed –since the April 20, 2009 filing of a libel lawsuit in New York State Court by Papua New Guinea tribesmen, to get interviews with Jared Diamond and The New Yorker Magazine.

The media sought comments regarding the libel allegations and iMediaEthics’s report on the numerous errors found in Diamond’s New Yorker essay, April 21, 2008, about revenge killings where he named Hup Daniel Wemp and Henep Isum Mandingo as organizers of murders in the Southern Highlands, Papua New Guinea, 1992-1995. Read the Associated Press report for a summary.

Importantly, Balter’s report in the May 15th issue of Science–“Vengeance’ Bites Back At Jared Diamond” includes quotes from interviews with both Pulitzer Prize winning scientist and UCLA professor, Jared Diamond, and David Remnick, editor of The New Yorker. This Science article is a “must read” if you have any interest in this case or any belief in the myths and legends about The New Yorker’s fact checking department.

Unfortunately, you have to buy the article for $15 for 24 hour access or become a subscriber/member of the American Assn. for the Advancement of Science (AAAS) to read it.  All is not lost. If you don’t have access to libraries or a AAAS membership, Balter wrote a blog entry that cites a few statements that will shock, if not surprise, those who have faith in New Yorker’s commitment to accuracy. Louis Proyect posted opening paragraphs on his blog. Also, more from iMediaEthics about Balter’s report this weekend.