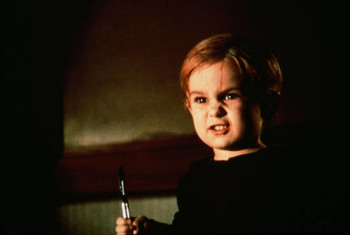 Gage from horror film Pet Cemetery, a toddler who went on a murder spree after being brought back from the dead. (Credit: film still via Youtube)

Not known for including comedy or irony in its reports, Science News was apparently duped last month by a satire article from The Onion, Gawker reported.

Science News is a magazine published by the Society for Science & The Public, a non-profit.

The Dec. 7, 2009 Onion article cited, “New Study Reveals Most Children Unrepentant Sociopaths,” claimed recent evidence found that  “an estimated 98 percent of children under the age of 10 are remorseless sociopaths with little regard for anything other than their own egocentric interests and pleasures.”

Science News linked to the faux Onion report in a July 23 article that stated, “A psychologist once even argued that most children under 10 would qualify as sociopaths if they were grown-ups.”

At first, Science News tried to cover up by scrubbing the error in the article without correction or disclosure to readers. But after Gawker and commenters called Science News out, it posted an editor’s note where it admits The Onion was “unintentionally” done. (Emphasis added):

“Editor’s Note: As noted in the comments and elsewhere, this article was amended on July 24, 2014, to delete a sentence that unintentionally linked to a parody article. Science News regrets the error but does think the parody article is pretty funny.”

However, a few days later, Science News published an additional update where suddenly the link and sentence were done on purpose.

In that update, Science News claims it knew The Onion article was parody all along and wasn’t duped.

“Update, August 1, 2014: The original intent of the author was to make light of the parody article mentioned above. So, upon further reflection, we have restored the sentence deleted from the second paragraph on July 24 and edited it to include the originally intended context and qualifiers.”

When Science News re-instated the sentence in its article, it qualified The Onion article was parody. The new sentence read: “We all joke that kids are little monsters, as in this parody article in which a psychologist argues that most children under 10 would qualify as sociopaths if they were grown-ups.”

iMediaEthics has written to Science News asking for an explanation for its contradictory admissions and why it initially failed to disclose the error and its scrubbing.

“This was not our proudest moment. For a magazine and a website committed to accuracy and clear communication with our readers, this episode was a reminder that we can never let our guard down.

“We made a number of errors: The blogger didn’t check over her post carefully. The blog editor rushed through edits. The blogger should not have deleted the original offending sentence, the one that implied she didn’t know it was a parody, without notifying her editors. Then, our editors should not have attempted to use humor to excuse the error, and should not have issued a correction until we were clear on the writer’s original intent.

“We have discussed all of this internally and have developed clearer guidelines for corrections that will be used in the future.”