SeaWorld : Still "No decision" made on killer whale's return after trainer's death

SeaWorld : Still “No decision” made on killer whale’s return after trainer’s death 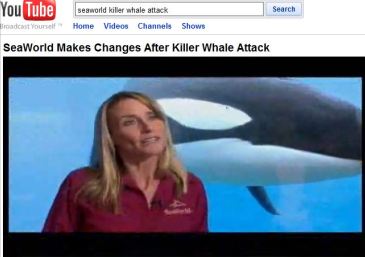 Screen capture from YouTube video of NBC-WESH Channel 2 report about SeaWorld's review of policies and procedures after trainer, Dawn Brancheau was grabbed and drowned by Tilikum, the largest male orca in the SeaWorld pod.

StinkyJournalism received a prompt e-mail response to questions from SeaWorld’s communications department regarding the fight over the public release of its video footage of Dawn Brancheau’s death and the whale responsible, Tilikum.

Vice President of Communications, Fred Jacobs, said SeaWorld hasn’t decided the fate of Tilikum, but that they “hope that he returns to shows.”  Jacobs gives explanations for the deaths of the two others that Tilikum is associated with, and provided several links.

StinkyJournalism:  Considering Tilikum has been linked with the deaths of three now, why is Tilikum possibly going to be part of SeaWorld shows?

Jacobs: “There are two issues here:  First, no decision has been made on Tilikum appearing in shows.  We are in the midst of a review of the practices and policies that guide our interaction with killer whales that is unprecedented in its scope.

“If Tilikum resumes appearances in shows it will only be when and if we determine it can be done safely.  It should be said, however, that Tilikum enjoys these performances and our guests certainly do too, so it is our hope that he returns to shows.

“We’re probably weeks away from a decision on that, however, and weeks after that in determining what alterations we need to make to assure that it is done safely.

“Second, the deaths of Keltie Byrne and Daniel Dukes have only limited relevance to a discussion of the death of Dawn Brancheau.  Tilikum was one of three whales involved in the drowning of Keltie Byrne at Sealand.

StinkyJournalism:  Why is SeaWorld against releasing the footage?

Jacobs : “Because Dawn’s family has a right to privacy that is well established in Florida law. If this video is released Dawn’s family will be exposed to these disturbing and graphic images for the rest of their lives.  Web sites that traffic in these kinds of images are well known. Anyone who has spent any time using the Internet knows what will occur if these images are released.  It is interesting to note the weight of public opinion on this appears to be overwhelmingly in our favor, even on Web sites of the news organizations seeking the release of these images.”

Jacobs posted a non-scientific, entertainment poll from Click Orlando that showed 815 of 1027 people (79%) voted that the family has a right to privacy with the video. There are many problem with such unscientific, Web-based news polls, including that anyone can easily “vote” multiple times.

StinkyJournalism:  By bringing Tilikum back to SeaWorld shows, won’t more employees be in danger?  What preventative measures will be taken?

Jacobs:  “Many preventive measures are already in place, but we continue to work on the review, which will likely result in new procedures for Tilikum and all of our other whales.  As I mentioned, no decision has been made on whether Tilikum will return to shows.”

Jacobs also provided a link to an Orlando Sentinel story on the changes SeaWorld trainers have made in interacting with Tilikum since Brancheau’s death.

StinkyJournalism:  After the media attention to SeaWorld and Tilikum, including Tilikum in shows seems like a surefire way to boost attendance.

Jacobs:  “I can assure you that we aren’t looking at it that way. The safety of guests and staff is our number one consideration.  The health and well being of our animals is second.  Appearing in shows is both good exercise and mentally stimulating for him, but we won’t put Tilikum back in performances unless we are sure that every precaution has been taken to assure the safety of our guests and staff.  He may never appear in shows again.  We just don’t know at this point.”

StinkyJournalism: With the most recent hearing this week, the media representative is reported to suggest a compromise where the media can see but not copy the footage.  Is that a satisfactory compromise for SeaWorld?

Jacobs:  “We are certainly open to any compromise that acknowledges the tremendous suffering that Dawn’s family would experience if these images were made public.”

Jacobs also provided a story The Palm Beach Post ran last night.  The Palm Beach Post reported that a day after Wednesday’s hearing, the judge continued the temporary injunction on SeaWorld’s footage and that “attorneys representing the media and the family of SeaWorld Orlando trainer killed by a whale will start negotiating soon some agreement on the access to videos and pictures that depict Dawn Brancheau’s death.”

SeaWorld : Still “No decision” made on killer whale’s return after trainer’s death