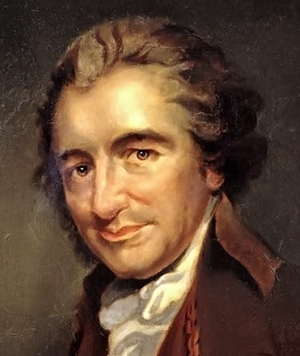 While federal shield legislation is debated over questions on the ethics of anonymous sources and what kinds of “journalists” should be protected, California State Senator Ted Kaufman writes in the Los Angeles Times that we should look to history to inform us on some of the answers.

Kaufman writes, “The ability of journalists to protect their sources is, simply put, a fundamental pillar of our democracy and liberty.” He argues a crucial question in the debate over a federal shield law is “who is a journalist. In other words, whose promises of confidentiality deserve protection?”

“For me,” he writes, “it’s always instructive to go back to the founders when addressing questions like these. Who did they have in mind when they drafted a 1st Amendment that wisely gave broad protection to ‘freedom of the press’?”

Undoubtedly, he argues, they had someone like Thomas Paine in mind. A pamphleteer, rather than a newspaper journalist, Kaufman says Paine’s role was analogous to that of bloggers today. “Throughout the revolutionary era, countless citizen-journalists like Paine, operating on street corners in Boston, New York and Philadelphia, informed the public, exposed and challenged corruption, and indeed inspired the American Revolution,” he writes. “That experience must inform whom we consider deserving of the shield.”

He argues critics contend that shield legislation should be limited so as to avoid protecting irresponsible entities who “don’t deserve” legal protection of their press freedom. But according to Kaufman, this misses the mark, when the intention of our nations initial guarantee of ‘freedom of the press’ didn’t draw those distinctions.

“Here at home the founders well understood the importance of a free press to check the abuse of power. As Thomas Jefferson said: “Our liberty cannot be guarded but by the freedom of the press, nor that be limited without danger of losing it,” he writes.

Of course, a robust shield law that protects a broad swath of “journalists” may impede the ease with which the government may investigate or prosecute. But Kaufman points out that this is a symptom of shield protection in general. It doesn’t make sense to deny some on the basis of the government’s need for easier law enforcement and not deny others.

“If we wanted to make law enforcement as easy as possible, we would not have a shield law,” he writes. “We’d also jettison the privilege against self-incrimination, and the protection of communications between lawyers and clients, penitents and clerics, doctors and patients, and husbands and wives.”