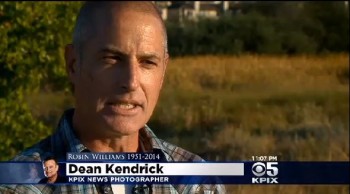 CBS News interviewed one of its own employees who claimed to have attended Alcoholics Anonymous with Robin Williams, Mediaite reported.

By doing so, CBS News opened a myriad of ethical issues, iMediaEthics notes.

Because AA is a 12-step recovery program bound by anonymity, not only is there no way to fact check what the source claimed about Williams, but the very matter of anonymity and Williams’ privacy was violated.

Information from Kendrick’s interview was featured not only on KPIX’s website but also on national CBS News’s This Morning.

Kendrick told KPIX about what he said was Williams’ “demeanor.”

According to Mediaite, KPIX has since “edited the online article to remove all mentions of the AA program, which, as its name suggests, prohibits attendees from revealing names of fellow addicts.”

Commenters on the KPIX article slammed the station.

“Dispicable. KPIX, how dare you. You have absolutely no reason to use this information anywhere at all — on the air, online. It’s not a ‘scoop’ at all. But it is very poor behavior, an example of terrible judgment by Sharon Chin and her editor and news director, and a trashing of standards from start to finish.”

“Articles like this are absolutely shameless. Everyone in the media seems to want a piece of this man’s death. Like vultures picking at a carcass.”

Matthew Keys, a journalist who wrote about the KPIX report, noted that a Facebook commenter clearly stated the issue with the report:

“The anonymity of those meetings isn’t supposed to end when the person dies. Celebs are at a disadvantage because just using their first name doesn’t keep you from knowing who they are. This story should not have been reported.”

iMediaEthics has written to KPIX, Kendrick, CBS News and Alcoholics Anonymous for comment.

UPDATE: 8/13/2014 2:28 PM EST A spokesperson from AA told iMediaEthics that “Alcoholics Anonymous does not express opinions on outside issues, and does not engage in public controversy.  A.A. would express no opinion on media stories, on decisions made or actions taken by media outlets, or on the behavior of any individual.”

The spokesperson also pointed to the AA’s letter to the media, published April 2014 on its website.  The letter states:

“The principle of anonymity is a basic tenet of our fellowship. Those who are reluctant to seek our help may overcome their fear if they are confident that their anonymity will be respected. In addition, and perhaps less understood, our tradition of anonymity acts as a restraint on A.A. members, reminding us that we are a program of principles, not personalities, and that no individual A.A. member may presume to act as a spokesman or leader of our fellowship.”

Further, it says, “If an A.A member is identified in the media, we ask that you please use first names only (e.g., Bob S. or Alice F.) and that you not use photographs or electronic images in which members’ faces may be recognized.”

Due to a typo, an earlier version of this article incorrectly said Matthew Keys wrote the KPIX story. He wrote about the article. His first name was also misspelled. It is Matthew. We regret the error.