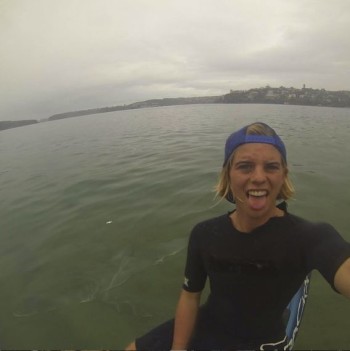 Alex Hayes posted this doctored image to his Instagram. Social media and news sites posted it as real.

Fake shark photo alert! An Australian teenager did NOT get a great selfie with a shark while surfing.

The teenager, Alex Hayes, posted the shark photo on Instagram, writing that he “went for a paddle” and took a picture with his GoPro after seeing a “chiller” shark “just cruisin.”

“Pretty much everyone fell for it,” Hayes told iMediaEthics by e-mail. “It is fake.”

“We thought it was pretty obvious, but since no one questioned it we just rolled with it,” he added.  And if people asked if it was fake, I would tell them but since no one asked, was pretty easy.” He said if anyone asked him about the photo in person he would “just change the subject” to avoid questions, but when the “media eventually started to question it” he answered media questions.

“It’s just a funny photo that was meant to be just a huge joke that has caused humour and discussion in the media,” Hayes added.

“It just went super viral so quickly,” Hayes wrote. “I didn’t expect that at all, but it’s good now that the awareness of sharks not all being dangerous has become a part of the subject because they are all beautiful creatures! We live in a beautiful place and we share it with some pretty cool animals, so I’m happy.” The UK Independent published a report on the photo as if it were real but it has since apparently deleted the story. A Google search still produces a story about Hayes and the photo but when you click on the link it redirects to the homepage.

The UK Mirror’s June 14 story was headlined, “Australian teen surfer posts picture of ‘shark selfie’ – but is it too good to be true?” The Mirror noted the photo could be “too good to be true” and “some claim it is a fake.”

Daily Mail Australia’s June 12 story is titled, “‘He was just cruisin’: Nonchalant teen surfer spots a huge shark under his board… so he grabs his gopro and SNAPS a selfie.” The Mail even worked in a Kim Kardashian reference in its lede. Pedestrian TV also covered the photo as if it were real, with the story “STRAYA: SURFER SEES SHARK UNDERNEATH HIS BOARD, TAKES SELFIE.”